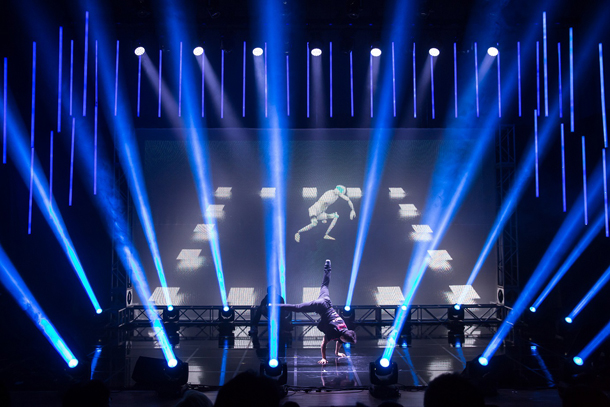 “BBOY X AI” is being shown at a showcase titled “11011101” run by S.M. Entertainment and KOCCA at the KOCCA Multi Content Testbed in Seoul on Nov. 1. [KOCCA]

Imagine what it would be like if you got a private message from K-pop boy band EXO’s Chanyeol about the group’s new album. Imagine if you could whine about a school test while chatting with him. A fan of his would be thrilled to have this kind of opportunity which could only happen in one’s wildest dreams.

A service that could enable this surreal experience was showcased at the Korea Creative Content Agency (KOCCA) Multi Content Testbed in Seoul on Wednesday. It is part of the 10-week-long program co-run by S.M. Entertainment and KOCCA to combine fast-developing artificial intelligence technologies with entertainment and music services.

“The artificial intelligence of today hasn’t advanced to a level where it can have a casual chat with people. For example, if you say, ‘I fell down,’ the machine can’t reply as humans do,” Kim Jong-yoon, the company’s CEO said during a press briefing prior to the showcase.

“We are working on a chat app where users feel as if they are engaged in a real conversation with their idols. The machine will reply something like, ‘You should have been more careful,’ or, ‘Are you hurt?’”

At the event to demonstrate the outcome of weekslong research and production, six teams played music, introduced an app and performed b-boying, all created in a collaboration between artificial intelligence, software engineers and artists.

Songwriter Jang Jae-ho, also a professor at Korea National University of Arts, said it’s been a while since musicians started using this technology to produce music.

“The focus has been on whether artificial intelligence can do what humans do. But what we are trying to do is create something completely different, something that human beings can’t make,” he said.

The attendees all agreed that the technology and people complement, not compete against, each other.

Park Jung-bae from the project team “Play with Error” believed that people can get inspiration from the work created by artificial intelligence. His team performed music jointly produced by musicians and AI technology and displayed the visualization of audio files.

“A computer creates a piece of music and a musician can edit and complete the work,” Park said.

Ryu Jung-hee, CEO of venture accelerator FuturePlay, who worked as a mentor, compared the technology to foreign songwriters employed by S.M. Entertainment, a move that helped K-pop introduce new music and expand its appeal beyond Korea.

“Artificial intelligence can learn and create music. It is not working based on algorithms. We don’t know what kind of sound a machine will produce,” he said. “It is this unexpectedness that can trigger creativity and inspiration.”