Light of a thousand stars

Light of a thousand stars 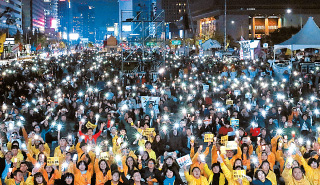 Citizens at the candlelight vigil commemorating the first anniversary on Oct. 28 of the massive rallies to protest the abuse of power scandal involving former President Park Geun-hye and her confidante, Choi Soon-sil. [KIM KYUNG-ROK]

All reporters have the experience of getting rejections for interviews. The most obvious excuses are “I am too busy” or “I don’t know much about it.” At the Yeouido candlelight commemoration, celebrating the first anniversary of candlelight protests on Oct. 28, I was once again rejected.

But the reason was different. When I approached a volunteer in a Halloween costume, helping maintain order near a crosswalk, he politely turned down the interview, saying, “I have a lot to say, but all the volunteers would have different opinions. If my views are reported as if they represent the entire group, I am afraid the interview would distort other people’s thoughts.”

One of the participants in Yeouido said that they gathered in Yeouido instead of Gwanghwamun as the current administration is doing well and they want to make demands to the opposition parties.

As they called for the parties to “Root out the longstanding evils” and “Arrest MB [the initials of former President Lee Myung-bak],” they also demanded, “Give votes to the young people.”

A singer was busking in the street and said, “Don’t forget the comfort women.”

Another said, “The candlelight vigil in Gwanghwamun was not just to drive out Park Geun-hye, but was also a call to make the whole world a better place.”

President Moon Jae-in celebrated the first anniversary of the candlelight protests and wrote, “Candlelight represents the future, which is not over for us. It is a future that we can accomplish when we go together. It is a future we can reach when we work persistently and tirelessly.”

People have different ideas, as diverse as the Halloween costumes some wore to the candlelight commemoration.

The commemoration taught me that the way to reach the future that Moon talked about is not by claiming that my candlelight is the only one that burns true, but by respecting the light that burns in other people’s hearts, as well.