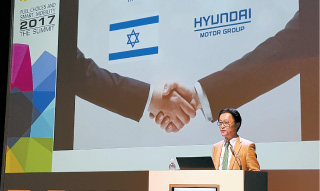 Hyundai Motor, Korea’s top automotive company, will partner with startups from Israel to cope with customers’ demands for advanced vehicles such as autonomous and eco-friendly cars.

Hyundai Motor will invest in promising start-ups in Israel in fields such as artificial intelligence, sensor fusion and cyber security, the carmaker said in a press release Thursday. Hyundai said it has revealed the plan at the 2017 Fuel Choices and Smart Mobility Summit, which took place from Oct. 31 to Nov. 1, to further strengthen its partnerships with start-ups and academic institutions in Israel.

“Hyundai Motor Group will join hands with start-ups in Israel to present a completely new form of smart mobility in the future,” said Chi Young-cho, a vice president of the company in charge of strategic development.

As a part of the company’s efforts, the company said it will start an Open Innovation Center early next year where start-ups and universities in Israel can gather to build networks and present their works to apply for investments from the Korean carmaker and venture capitalists. The company added that it will eventually expand the center into a full-fledged research center.

Hyundai said that it decided to look for partners in Israel due to the competitiveness of the start-ups there, especially in technologies that are considered essential in the so-called “fourth industrial revolution” such as artificial intelligence and sensor fusion.

This is the second initiative this year by the Korean carmaker to find business partners in Israel.

In September, the company formed a consortium with Technion, or the Israel Institute of Technology, and Korea Advanced Institute of Science and Technology to collaborate on research.