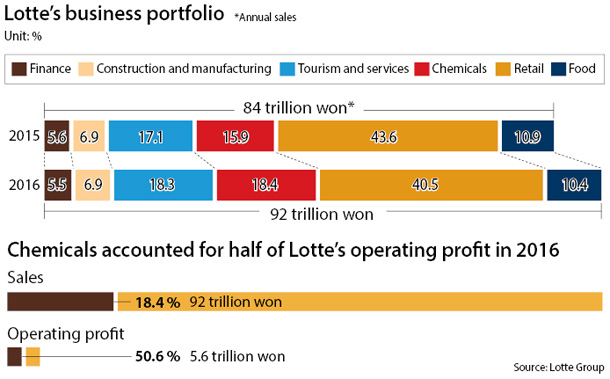 For the last 50 years, Lotte was one of Korea’s biggest retail conglomerates. But this is about to change as the company is going through a major transformation - not only structurally, but also regarding its business portfolio as the group aggressively expands its chemicals sector.

The change is led by Chairman Shin Dong-bin, who has been working on designing a new future for Lotte after gaining the upper hand in his feud with estranged older brother Shin Dong-joo. Lotte Corporation, the group’s holdings company and the core of Lotte’s structural reform plan, has just begun trading on the stock market this week.

One of the main reasons Lotte is expanding its chemicals sector is demonstrated in its earnings report. Lotte Group said Tuesday that it is expecting the sector to raise around 60 percent of the company’s entire operating profit this year. The sector did well last year, having raked in 50.6 percent of Lotte Group’s total revenue of 5.6 trillion won ($5 billion).

“Chemicals is a huge contributor at a time when department stores, duty free and marts have struggled due to retaliations from China over Thaad,” said a senior executive at Lotte.

Lotte Chemical - the core of Lotte’s chemical sector - has grown enough to compete with the domestic industry leader, LG Chem. As of the third quarter, Lotte Chemical generated an accumulated operating profit this year of 2.2 trillion won, meaning it’s likely it’ll surpass last year’s annual record of 2.5 trillion won. Its operating profit between July and September was 766.2 billion won, slightly lower than LG Chem, which posted a quarterly record of 789.7 trillion won for the same period. In terms of profit to sales ratio, an indicator of profitability, Lotte was higher at 19.1 percent to 12.3 percent.

Lotte Chemical’s subsidiaries Lotte Fine Chemical and Lotte Advanced Materials, both acquired from Samsung last April, are also in the chemicals sector. The M&A widened the range of chemical materials and commodities produced by Lotte to include fine chemicals. Before then, Lotte Chemical focused on the production of raw materials for chemical goods like ethylene.

A big contributor to such achievements was the exceptionally favorable market this year. For Lotte, the recent success is an indicator that its investments over the last few years are paying off. Many of the largest M&As Lotte has conducted in the last few years were concentrated on the chemical business. The mastermind behind the projects was Shin Don-bin, who felt that “retail and food is not enough for the company’s sustainable growth.”

The investments are slowly improving the group’s competitiveness as a whole by providing a stable supply chain and expanding foreign markets. Hyundai Chemical, a joint venture of Lotte Chemical and Hyundai Oilbank, started producing mixed xylene last year, stabilizing Lotte Chemical’s raw material supply for paraxylene. Lotte MRC, Lotte Mitsui Chemicals and a gas field complex in Uzbekistan were all established in the last decade and are contributing to improved profits.

The 2015 acquisition of Lotte Fine Chemical and Lotte Advanced Materials from Samsung, worth nearly 3 trillion won at the time, became a stepping stone to Lotte’s portfolio expansion and the manufacturing capacity of high-value added products. This is because the addition of the two meant Lotte Chemical had access to everything needed to produce petroleum and other complex chemical products.

The conglomerate’s future plan is to invest in foreign chemical markets. Chairman Shin is said to have recently discussed chemical investments in Indonesia with officials from the country.

“We’re looking for new investment sites in the Southeast Asian market from which we’re expecting the next big opportunity to come,” said a senior executive at Lotte. In July, Lotte Chemical’s Malaysian subsidiary, Lotte Chemical Titan, went public on the local stock market. The one trillion won of funding from the IPO will be poured into new businesses in Southeast Asia.

A factory that will produce ethylene using shale gas from North America is also under construction. The relatively cheap shale gas there increases the profitability and stabilizes Lotte Chemical’s business structure in the region. Last year, the company signed a contract worth $3 billion with the U.S.’s Axiall Corporation for the project. Their aim is to start commercial production in the first half of 2019.