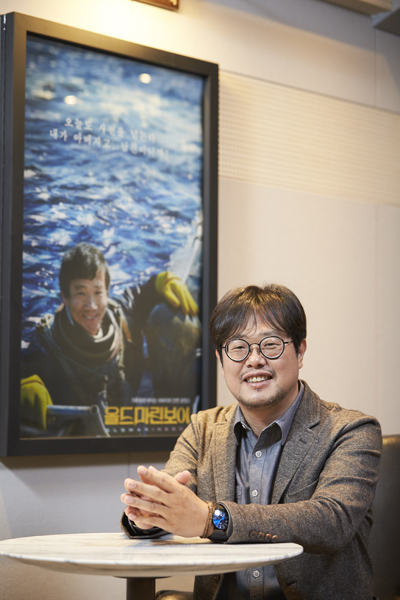 Director Jin Mo-young, who was behind the hit documentary “My Love, Don’t Cross That River,” released “Old Marine Boy,” his first documentary in three years, this week. [CGV ARTHOUSE]

In 2014, director Jin Mo-young set a new box office record for a documentary with his debut feature “My Love, Don’t Cross That River,” with 4.8 million tickets sold. The documentary, a love story of then-89-year-old Gang Gye-yeol and her 98-year-old husband Jo Byeong-man, captured audiences’ hearts with its honest depiction of the elderly couple’s relationship.

In the hopes of breaking his own record, Jin released his second documentary “Old Marine Boy” earlier this year. It premiered at the 9th DMZ International Documentary Film Festival held in September and was released in theaters yesterday. It revolves around a deep-sea diver named Park Myeong-ho, who dives 50 meters (164 feet) into the sea in Gangwon while wearing a 60-kilogram (132.3 pounds) diving suit.

Relying on only a single oxygen line, the job forces him to face the line between life and death everyday. He risks becoming disabled from getting decompression sickness, but Myeong-ho can’t stop because he needs to support his wife and two grown sons.

Having crossed the border from North Korea with his family in 2006, Myeong-ho knows what it is like to be faced with a life-or-death experience. But he still carries trepidation when he enters the water each day.

Realizing that Myeong-ho’s motivation to work so hard is his family, the filmmaker captures him as not only a courageous diver, but also as a caring husband and father.

Excited, yet feeling the pressure to pull off another box office success, the director sat for an interview with the Korea JoongAng Daily last week to discuss the new movie. Below are edited excerpts.

Q. How do you feel about “Old Marine Boy” heading to the big screen?

A. Of course it’s not easy for me to ignore what other people say about the film. In the beginning, I just thought that a film’s box office success is up to fate. But once I completed the documentary, I began to think about all the people who put in effort and helped make the film, like the producers, investors and the cast in particular. Although breaking a record won’t be easy, I hope and have a desire for the latest film to pull off a good box office performance.

You began working on “Old Marine Boy” while finishing up “My Love, Don’t Cross That River.” I’m guessing that was possible because you were confident in the topic. What inspired you to make a film about a deep-sea diver?

Since filmmakers deal with visuals, we care a lot about how something looks. When I saw a picture of a deep-sea diver in a travel magazine, I was shocked. The image was so powerful. The diver staring at the camera while in a diving suit with a helmet and yellow rubber gloves against the backdrop of dark blue rippling waves overwhelmed me. Next to the picture read, “For choosing to work in the sea over the past 30 years to feed his family, he has had to give his two legs to the sea.” The diver in the picture got decompression sickness while diving, which I felt was very relatable in that we often have to do something that we don’t want to do. I was confident about the topic and the image.

But I realized that the man in the picture couldn’t make it out of the hospital when we started shooting. So while looking for another deep-sea diver, I found Park Myeong-ho. He had a powerful personal background. I thought his experience of having crossed the border could make the story about life or death more powerful.

Originally you wanted to examine life by comparing it with the life of a deep-sea diver. But “Old Marine Boy” seems closer to the story of a struggling breadwinner who devotes his life to support his family. Did casting Park change what you wanted to say?

Documentary is like a drama without a script. It’s impossible to predict how the scenes will turn out. While filming Park, I realized that what motivates him to work so hard is his family. Though he doesn’t openly talk about it, he agonizes over how he will support his family and how his family can live, if, by chance, he dies. So “Old Marine Boy” is a story about a devoted father and husband as well as a story about life.

It took you a month to convince Park to take part in your documentary. What finally made him want to participate?

When I first met him, he had been in South Korea for around eight years. He had appeared on several TV shows, but wasn’t satisfied with the fact that the programs only showed the bright side of North Korean defectors’ lives and depicted them all as having successfully settled across the border. Park had difficulty adjusting to society, mainly because of prejudice and discrimination. But since that wasn’t dealt with on those shows, he wasn’t willing to appear on the mainstream media. But since I’m a documentary director, I could offer to deliver his real story, both the good and the bad.

How did Park’s family react after seeing the film?

I told Park that I portrayed his family from my perspective and asked him if any of it had been distorted. Park told me that it accurately represented his life. As for his wife, she said she was able to think again about how harsh her husband’s job is. She had a vague idea, but she didn’t know in detail how heavy his diving suit is and how octopuses try to fight him under water. As for his eldest son, he said he realized how much his father has devoted to his family, and added that he could now better understand his dad.

How do you want the audience to perceive your story?

When it comes to North Koreans, people often pity, sympathize with or discriminate against them, similar to the feelings people used to have toward the disabled. But I want the audience to realize that defectors are just friendly neighbors from a different town. This film is not about a struggling defector trying to settle into Korea. The fact that he is a defector is just his background.

Did you have any difficulties while shooting the documentary?

Capturing Park catching the octopus, which was used in the opening scene, was very tough. It was a battle against time, as our cameraman could only stay underwater with his oxygen tank for a limited time.

The film’s message that “Life doesn’t always turn out the way you had expected” also applied while shooting the film. We originally planned to film for one year, but we ended up spending three.