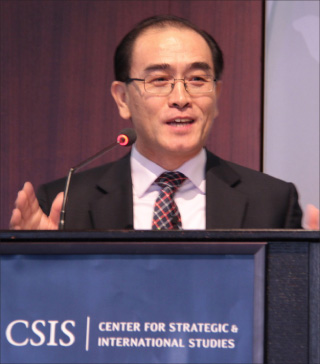 Thae Yong-ho speaks at the Center for Strategic and International Studies in Washington on Tuesday. [YONHAP]

WASHINGTON - A high-ranking North Korean defector urged the United States on Wednesday to meet with Kim Jong-un before considering military action against his regime.

Thae Yong-ho, a former deputy chief at the North Korean Embassy in London, addressed the current crisis over North Korea’s nuclear weapons program as he testified before the House Foreign Affairs Committee on Capitol Hill.

“Some people do not believe in soft power, but only in military options,” the 55-year-old said on his first visit to the United States. “But it is necessary to reconsider whether we have tried all non-military options before we decide that military action against North Korea is all that is left.”

He went on to make a proposal that Washington has been reluctant to embrace.

“Before any military action is taken, I think it is necessary to meet Kim Jong-un at least once to understand his thinking and to try to convince him that he would be destroyed if he continues his current direction.”

The North Korean leader does not have a full grasp of the strength and might of U.S. military power, Thae said, leading him to believe that if he can get Washington to accept Pyongyang’s possession of ballistic missiles capable of reaching the United States, all sanctions against his regime will be lifted.

The former diplomat is in Washington at a time of heightened tension over Pyongyang’s nuclear and missile testing. U.S. President Donald Trump is set to travel to Asia on Friday in part to rally further support behind his administration’s sanctions and pressure campaign.

“We can educate the North Korean population to stand up by disseminating outside information,” he said. “However, is the United States really doing enough in this regard? The U.S. is spending billions of dollars to cope with the military threat. Yet how much does the U.S. spend each year on information activities involving North Korea in a year? Unfortunately, it may be a tiny fraction.”

Thae defected to South Korea last year with his wife and two sons. He said he could not let his children live as “modern-day slaves” in North Korea after having grown accustomed to online gaming, Facebook messaging, email and internet news in Britain.

Human rights abuses in North Korea are “tantamount to the crimes committed by the Nazis,” Thae claimed, and the world must come together to stop them as it did to abolish the South African apartheid.

Thae said the sanctions campaign should also continue until North Korea returns to negotiations for its denuclearization.