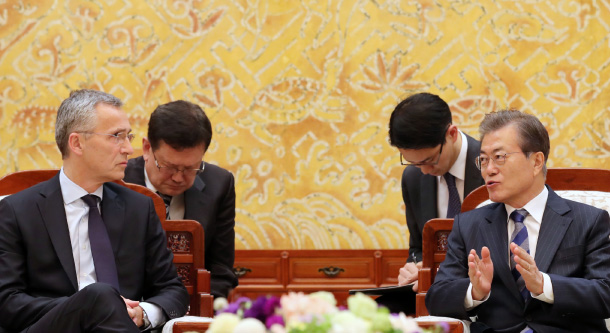 Korean President Moon Jae-in, right, talks with Jens Stoltenberg, secretary general of the North Atlantic Treaty Organization, in a meeting at the Blue House in Seoul on Thursday. [YONHAP]

“I appreciate and agree with the fact you stressed that the North Korean nuclear issue must be resolved through diplomatic means,” the president said while meeting with NATO Secretary General Jens Stoltenberg at his presidential office in the Blue House.

Moon noted his country maintained a very close relationship with many NATO member states, noting many of them had also sent troops to help defend South Korea during the 1950-53 Korean War.

“And so the country hopes the cooperative relationship between the country and NATO as global partners will further develop, and wishes it will especially be enhanced in the military sector,” he added, according to the Blue House pool reports.

Stoltenberg arrived here earlier in the week for talks on ways to boost NATO’s bilateral cooperation with South Korea and their joint efforts to rein in North Korea’s evolving nuclear and missile capabilities. He held bilateral talks with South Korean Foreign Minister Kang Kyung-wha on Wednesday.

Noting his trip to the demilitarized zone that divides the two Koreas earlier in the day, the NATO chief said he was moved to see numerous South Korean troops defending not only peace on the Korean Peninsula but in the entire world, according to the Blue House pool reports.