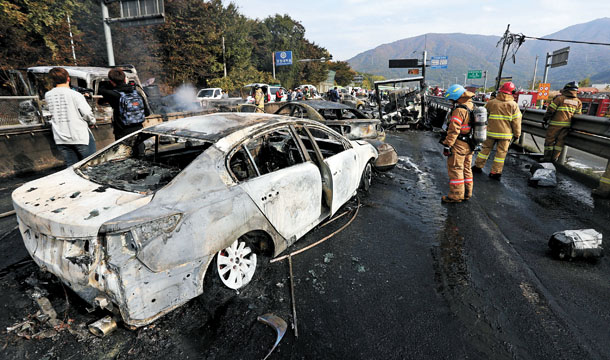 Firemen restrict access to the scene of an accident in which a 5-ton cargo truck carrying machine lubricants crashed into a guardrail and set nearby vehicles ablaze, killing at least three people Thursday afternoon near the Changwon Tunnel in South Gyeongsang. [YONHAP]

CHANGWON, South Gyeongsang - A 5-ton cargo truck carrying drums of machine lubricants smashed into a concrete guardrail early Thursday afternoon in South Gyeongsang, setting off a fireball that engulfed nearby vehicles and caused three deaths, including the driver of the truck.

The truck, which was heading west through the Changwon Tunnel in South Gyeongsang at 1:23 p.m. on Thursday, was carrying thirty 200-liter (52.8-gallon) barrels and forty 20-liter plastic drums of lubricants when it drove into the guardrail. The drums exploded like bombs and flew into neighboring lanes.

Nine cars in the opposite lanes driving east towards Jangyu County were instantly set on fire, including a 1.5-ton delivery truck.

A man whose Chevrolet Malibu was completely consumed recounted, “I heard sounds of explosion, and just a moment later, lubricant containers flew over from the opposite lane to land on the vehicles around me. As they touched the ground, everything became enveloped in flames.”

He was fortunate to survive. Three people, including the driver of the truck carrying the lubricants, died, and five others were injured.

A source from the Changwon fire station said, “The damage done to the bodies and vehicles is so severe that it is difficult to identify the casualties.”

In the debris of a Chevrolet Spark, firemen discovered the body of a woman holding something tightly in her arms, assumed to be either an infant or a pet.

Although firemen were able to completely extinguish the fire when they arrived at the scene at 2:30 p.m., the smell of burning was reported to have been still pervasive in the area for hours following the crash.

When firemen arrived at the accident, some ten vehicles consumed by the fire were mere metal frames. Some of the cars had lubricant barrels stuck in them, while lubricant drums were strewn across the scene.

A person who was in the 1.5-ton delivery truck described a near-death experience: “I was observing the fire in the next lane from my seat, only to suddenly realize that the flaming containers were exploding and crossing over to our lane.

“Though the people in the vehicles behind us were able to save their lives by fleeing the scene, those who could not get out of their vehicles in time suffered burns.”

Witnesses who had been driving behind the cargo truck testified that the truck was zig-zagging right before the accident. Police are investigating the possibility that the accident occurred due to a problem with the truck’s brakes.