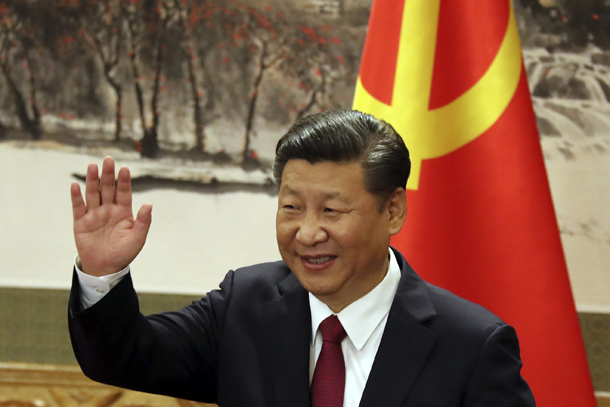 Chinese President Xi Jinping waves during a press event to introduce the new members of the Politburo in Beijing’s Great Hall of the People on Oct. 25. [AP/YONHAP]

The second term of Chinese President Xi Jinping began amid speculation and controversy. A strong one-man system beyond expectation has been unveiled. It is unprecedented for “Xi Jinping Thought” to be inserted in the Communist Party constitution right as the second term begins. Now, Xi has a political status higher than Hu Jintao, Zhang Zemin and even Deng Xiaoping.

Xi solidified his power by including his close allies in the standing committee of the politburo, while excluding potential successors. For the next five years at least, Xi’s “new era” is sure to unfold.

There are two noteworthy points as Xi’s new era opens. One is the meaning of Xi’s reinforced power in the Chinese Communist Party system. The other is the foreign policy direction of the Xi Jinping system.

Most of all, Xi Jinping’s second term advocates a “new era, new philosophy,” but it actually goes against the grand flow of Chinese political development and institutionalization since Deng Xiaoping.

The nation’s group leadership has returned to one-man rule, and the tradition of “grandfather-designated successor,” the symbol of stable and predictable power transition, was not respected.

The early inclusion of “Xi Jinping Thought” suggests the urgency of strengthening the system. As Xi’s leadership philosophy is now in the spotlight, he has the burden of having his philosophy scrutinized for the next five years.

The thing is, the irregularities were made through an agreement at the party congress. They share the consensus that strong leadership is necessary to strengthen power and stabilize the Communist Party, even when it results in a delay in political development.

In other words, the Communist Party system is faced with complicated challenges and tasks that require securing strict order in the system through a concentration of power.

While Xi Jinping’s second term is off to a splendid beginning, we must wait and see whether the regressive decision to strengthen the leadership is a choice that will guarantee stability and the development of the Communist Party system.

In retrospect, the Xi Jinping government in 2012 was expected to pursue political reform. The zeitgeist of the Mao era was a revolution, and the reformist leadership under Deng Xiaoping, Zhang Zemin and Hu Jintao affirmed the legitimacy of the Communist Party with rapid growth.

But as the “new normal” suggests, it is difficult to continue the type of rapid growth, which has been taken for granted during the Xi Jinping government.

In any case, some sort of political reform to accommodate China’s diversified public opinion is inevitable. For the first five years, Xi wished to secure the legitimacy of his leadership with an anti-corruption campaign and the “Chinese Dream,” an attempt at a revival of the Chinese people rather than political reform.

The concentrated power of Xi Jinping is a natural extension of such efforts. Nevertheless, the Xi Jinping system still has the challenge to respond to in the “new generation,” and it must find new reasoning to enhance his leadership legitimacy.

The world is closely watching how Xi Jinping’s leadership will function as a component of the international community. If his leadership prioritizes domestic policy, it may pursue unexpectedly low-costs and stable international relations.

But if Xi’s goal is the realization of a prosperous China, development and stability are important.

At the same time, the Xi government could avoid a direct clash with the United States, due to the new isolationism of the Trump Administration, and have an important strategic chance to become prosperous and powerful.

China emphasizes the accountability and role of global governance in the international community and hopes to secure a global leadership position distinguished from that of the United States.

Depending on how the United States responds, geopolitical competition in Asia may be revived, and Korea could be faced with pressure from both the United States and China. Meanwhile, the vision of realizing the Chinese Dream would help secure the legitimacy of the system, but excessively inspiring nationalist sentiment among the Chinese people could hinder flexibility in China’s foreign policy.

With regard to the issues China has already defined as core interests, such as the maritime territorial disputes, Beijing would have to maintain a hard-line position rather than compromising or conceding.

At the same time, its now reinforced one-man leadership system may improve the efficiency of policy decisions, but can result in limits in diplomatic flexibility as seen in its recent discord with Korea over the Thaad deployment.

*The author is a professor at Dongduk University.