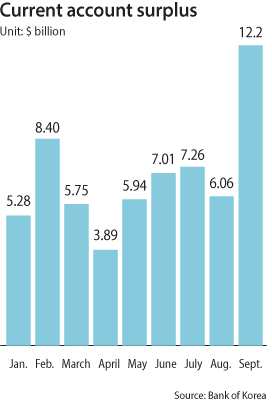 Korea’s current account surplus widened in September from a year earlier due to an increased surplus in the goods account, central bank data showed Friday.

The country’s current account surplus reached $12.21 billion in September, compared with a surplus of $8.07 billion a year earlier, according to the preliminary data from the Bank of Korea (BOK).

The figure represents a surplus for 67 months in a row. The current account is the biggest measure of cross-border trade.

The BOK said the goods account surplus hit a record high of $15.01 in September due to brisk exports of semiconductors.

Meanwhile, the services account deficit widened to $2.90 billion from a deficit of $2.58 billion a year earlier due to a rise in overseas trips and deteriorations in the manufacturing services.

The number of outbound tourists came to 2.23 million in September, up 17.4 percent from a year earlier.

Meanwhile, foreign visitors to Korea plunged 29.2 percent on-year to 1.07 million. Among foreign visitors, the number of Chinese travelers came to 318,682, a drop of 56.1 percent from a year earlier.

The decline in Chinese tourists is widely blamed on a diplomatic row between Korea and China over the deployment of an advanced U.S. missile defense system in Korea.

China imposed restrictions on Korean imports and banned the sale of group tour packages to Korea in retaliation.

Korea and China agreed earlier this week to put their bilateral relations back on track, a move that could increase the number of Chinese tourists to Korea moving forward.

The primary income account surplus increased to $1.15 billion in September from a surplus of $780 million a year earlier.