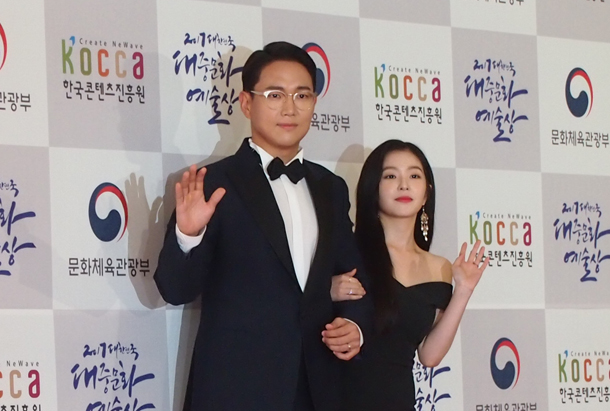 On Friday, the Ministry of Culture, Sports and Tourism held the 2017 Korea Popular Culture and Arts Awards in association with the Korea Creative Contents Agency (KOCCA) at the Haeoreum Grand Theater in the National Theater of Korea, central Seoul.

This year marks the award ceremony’s eighth year and featured Red Velvet’s Irene, right, and JTBC announcer Jang Sung-kyu, left, as the MCs of the event.

The award ceremony was initially supposed to begin with a red carpet, but it was cancelled in tribute to the late actor Kim Joo-hyuk. The evening was a solemn affair as the celebrities mourned the loss of the actor.

A total of 28 celebrities from diverse fields of the entertainment industry were awarded. Actor Namkoong Min was given the Minister of Culture, Sports and Tourism Commendation along with seven others.

Prime Minister Commendations were given out to seven artists, including boy band Exo. The President Commendation was awarded to comedian Kim Mi-hwa, actor Kim Sang-joong and five others.