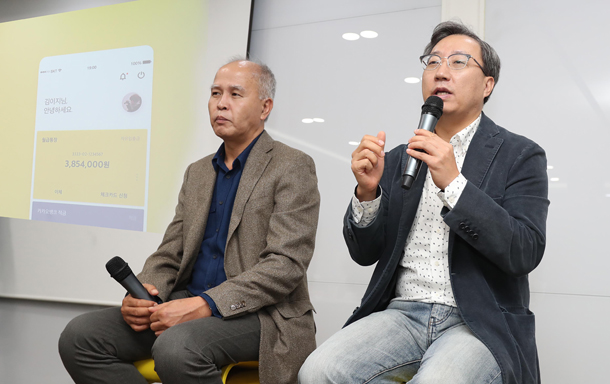 During a press conference held at its office near Seoul Station in central Seoul on Friday, which was the 100th day since it officially launched on July 27, officials disclosed the performance of the bank as well as its future plans.

According to company data, Kakao Bank has amassed 4.02 trillion won ($3.6 billion) in deposits during the past 100 days. During the same time, it’s issued a total of 3.39 trillion won in loans. The total number of accounts opened is 4.35 million, making the bank one of the fastest-growing financial institutions in Korea in terms of the number of new customers.

“To better respond to the growing number of customers, we have decided to open two additional customer centers, both located in Seoul,” said Lee Su-young, in charge of the strategic operation of the bank. Lee further explained that the company plans to launch a loan product that can be used for house deposits, issuable through mobile apps without having to visit a brick-and-mortar branch.

“House deposit loans require arguably the most complicated process among any type of loan,” said Yoon Ho-young, the co-chairman of Kakao Bank. “We’ve invested a lot of time and effort into this product and I think being able to eliminate cumbersome processes and thus minimizing the required time itself is innovation.”

Lee Yong-woo, co-chairman of the bank, added that one of the reasons behind their decision to postpone the launch of regular mortgage loans is because of the government’s measures to apply stricter regulations to that type of lending.

Adding credit cards to its product portfolio is another key item on Kakao Bank’s agenda, and the bank will apply for government approval next year and officially launch the service sometime in 2019.

Yoon explained that they wanted to diversity payment options for customers by offering credit cards.

“There is so much data that can be collected [from different forms of payment], which we can ultimately use to create our unique business model, including a credit rating model of our own,” Yoon added.

Kakao Bank recently came under fire by lawmakers and the local media after it failed to cater to borrowers with lower credit ratings, which was thought to be one of the main purposes of mobile-only banks.

Before the launch, financial authorities in Korea said internet-only banks will be able to offer lending options to borrowers with credit scores between four and six, most of whom are often rejected by the existing commercial banks and forced to turn to savings banks - which are consumer finance companies that cater to bad-credit borrowers - and other institutions that offer steeper interest rates.

But according to data presented by Rep. Park Yong-jin of the ruling Democratic Party, over 60 percent of the loans that Kakao Bank has issued during its early stages of operation went to borrowers with good credit scores.

“The line of credit is smaller for borrowers with lower credit ratings, which is why the total amount of loans issued to them looked smaller,” said Yoon. “But in terms of the number of loans issued, borrowers [with a credit score of four to six] make up about 30 percent.”

“A bank has to consider risks when issuing a loan,” added Yoon. “Over time, as we accumulate more data about the financial activities and credit history of our customers, we will be able to offer them better loan options.”