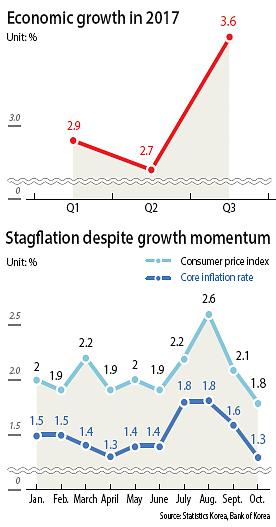 Typically, inflation comes with strong growth. But many advanced economies, including the United States, have recently experienced the mysterious combination of higher growth and persistently low inflation.

A deputy governor of the Bank of Korea acknowledged that Korea is in a similar place - which poses a challenge to the central bank in terms of monetary policy. The BOK has suggested a preference for a possible hike from a record low benchmark interest rate - even with lower-than-expected inflation.

“The global economy has been emerging recently from a long-term economic slowdown, as economic conditions in both advanced and emerging market economies are now improving,” said Yoon Myun-shik, deputy governor of the Bank of Korea during a conference held jointly with Seoul National University.

He cited the term “missing inflation” to refer to weak inflation at a time of economic recovery.

“There have been active discussions recently on the weakened linkage between economic activities and prices, and on the changes in inflation dynamics that have led to talk of so-called ‘missing inflation,’” Yoon continued, “In Korea as well, our economic activities continue to improve steadily… But core inflation, which reflects our demand-side inflationary pressures, is still in the mid-1 percent range.”

The numbers bear that out.

Korea’s economy rebounded in 2017 due largely to strong exports, with the third quarter seeing the highest gross domestic product growth in more than seven years at 3.6 percent. That raised hopes that the country will achieve 3 percent growth for all of 2017. Growth in GDP was 2.9 percent in the first quarter and 2.7 in the second.

The inflation rate, on the other hand, seesawed near the Bank of Korea’s target range of 2 percent. The consumer price index registered 2 percent in January and picked up to 2.6 percent in August. But the rate has retreated since then because of a downturn in agriculture and food prices. The figure stood at 1.8 percent in October, the lowest in 10 months.

Yoon noted that such a phenomenon could put central banks that want to raise interest rates in a bind.

Still, analysts believe the Bank of Korea will raise its key rate.

“Even though the recent consumer prices remained stagnant, the headline numbers will likely reach the Bank of Korea’s target of 2 percent,” said Moon Jeong-hee, an economist at KB Securities.