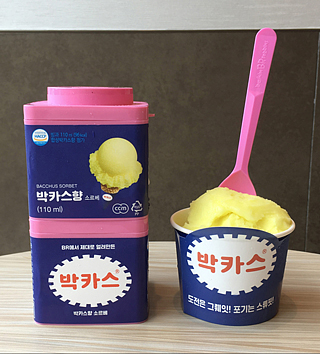 The flavor is named Bacchus Sorbet and will be sold in all Baskin-Robbins branches nationwide this month ? but only for the month of November. A spokesman for the ice cream franchise said Friday that supplies were still in the process of being delivered to some branches.

As its name suggest, Bacchus Sorbet will be more like frozen Bacchus instead of a cream-based product. The ice cream will contain 500 milligrams of taurine - a restorative - per 100 grams of ice cream.

This is the first time Bacchus has come out of its iconic brown bottle with the blue and red label and used in another product.

The product is a legendary best seller in both the Korean pharmaceutical and beverage markets. Its sales of 20 billion bottles since its release in 1963 is unsurpassed by any other such product.

A spokesman for manufacturer Dong-A Pharmaceutical explained that the release of Bacchus as an ice cream flavor was a marketing idea to perk up its image among the younger generation.

Until 2011, Bacchus was registered as a medicinal product, meaning it was treated like a drug and sold exclusively at pharmacies. It couldn’t be made into any other kind of product. The company changed its registration status to quasi-drug, allowing it to be sold at convenience stores and retailers. Bacchus is currently sold as Bacchus-D in pharmacies and Bacchus-F in other retail outlets. The 120-milliliter (4-ounce) Bacchus-F has half the amount of taurine than the 100-milliliter Bacchus-D.

There have been several such collaborations in the Korean snack market this year.