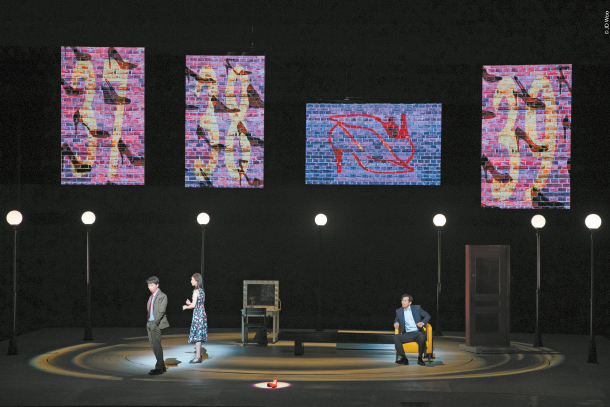 “L’Appartement,” a play based on the 1996 French film of the same name, is currently being staged at the LG Arts Center, southern Seoul. The play, starring actor Oh Ji-ho and ballerina Kim Ju-won, runs until Sunday. [LG ARTS CENTER]

A man named Max, who has only few months left till his wedding suddenly leaves everything behind after he catches a glimpse of his ex-lover, Lisa. He’s determined to meet her, but they keep on missing each other. During the process, Max even gets seduced by another woman, named Alice, who appears in front of Max, and introduces herself as Lisa.

This is the plot of the 1996 French film “L’Appartement,” directed by Gilles Mimouni. By showing each character’s hopes and desires, and their struggles to achieve them, the film tries to show the reality of life and love for many. The films give viewers a look at a time when it was common to use public phone booths and write handwritten letters to reach somebody.

The movie has now been turned into a play, also titled “L’Appartement,” by one of Korea’s most sought-after playwrights and a leading stage director, Ko Sun-woong. For the lead roles Ko decided to cast two amateur theater actors, Oh Ji-ho and ballerina Kim Joo-won, who are both making their professional theater debut through “L’Appartement.”

The fresh casting topped with Ko’s brilliance in bringing the older touches of the film onto the stage using a variety of digital techniques, have attracted crowds to the theater. With positive reviews from both critics and audiences, the play is about to lower its final curtain on Sunday at the LG Arts Center, southern Seoul, after ending its three-week run.

“I never thought I would do a play,” said Kim. “I’m still quite bewildered that I’m doing this. Of course I dance a lot in films, but it’s quite different to the ballet I’ve been doing.”

But Ko said he knew that Kim would do great playing Lisa, who is a stage actress, in his play.

“I knew I would work with her one day,” said Ko, adding that he witnessed her talent as an actor after seeing the dance musical “Contact” last summer, in which Kim appeared.

Although Kim says she’s still “bewildered” that she’s doing a play, it was in fact Kim, who knocked on Ko’s door asking if she could appear in one of Ko’s future works.

“Unlike a film, a play has to have some kind of an illusion rather than being realistic,” Ko added. “The Lisa who Max falls in love with, should be more than just beautiful. She has to have powerful charm as well as a charisma that intimidates men.”

Because he had no doubt about Kim’s dancing abilities, Ko says he wanted to use that powerful ability on stage and recreate Lisa.

“For the play, it was important for Lisa to have that aura, rather than the acting skills or brilliant lines,” Ko added.

To hear more about the play, the JoongAng Sunday recently sat down with Ko and Kim for an interview. The following are edited excerpts. 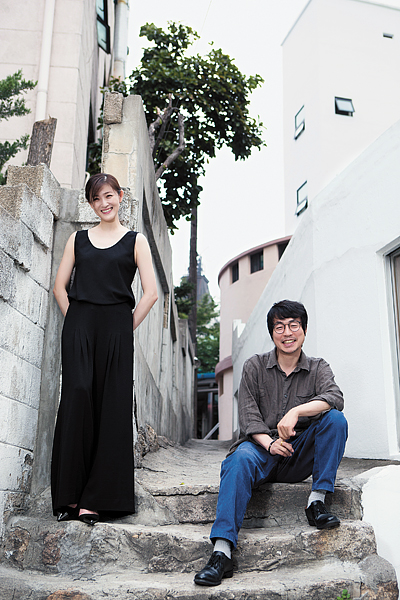 Q. Although Lisa uses her body a lot to express her feelings and communicate with others in the play, it must have been quite difficult for Kim to appear in a play since it is totally new for her. How was it?

A. Kim: It wasn’t easy, especially the diction. I heard director Ko has a specific style of diction he wants his actors to have, but I just couldn’t get it in the beginning. Instead, my voice trembled so much, I thought I was a lamb. By watching other veteran actors do their job brilliantly, I even began to have this sense of shame, thinking, “what am I doing here?” I felt like I was just being a nuisance. But Ko showed endurance and guided me step by step. Then, rehearsals became really exciting for me. I think this genre of performing arts is as attractive as dancing.

Ko: You don’t have to know how to act because you just learn along the way. You just move your body and become that character on stage. You quickly realize that what you are doing is acting. As you analyze and study the script as an actor, you instinctively learn to become an actor. That is my method of guiding actors for my work. In that sense, Kim was like a sponge. She really absorbed everything I wanted to do through her.

Six men and women are entangled in this story. Lisa and Max love each other, but the love can’t seem to be fulfilled due to interruptions and crisscrosses. Did you like the story?

Kim: When I watched the film 20 years ago, I hated Alice. But now, I feel empathy towards her. In fact, I can sympathize with all six characters in the play. I know what it’s like to love somebody who doesn’t love me back and I know how one’s feeling can be so unstable, like Max. I think we all know what it’s like. That is why I think this story can appeal to many people.

But do you think you can forgive Max, who vacillates between three women?

Ko: In fact, I, myself, can’t really understand how he could be like that, but I guess he had no choice. He loved Lisa so dearly but as much as he loved her, he resented her for leaving him, though he later finds out it was a setup by Alice. Time went by so he naturally got engaged to another woman, but suddenly got into a situation where he can’t help but to think about his love from the past. He gets seduced by Alice, who tries everything to resemble Lisa in front of Max, and he falls for her too. I don’t know, I guess, that is another kind of love that exists.

Kim: It is a problem for Max to be so easily attracted to different women and have such an indecisive attitude. No women will fall in love with that kind of character. But as you follow along the story, you begin to have sympathy for Max as well. He too has wounds in his heart. Alice does as well. And although she’s the bad one in the play, she’ll think that Lisa is the villain for stealing the man who she loved even before her.

The French film has an open ending, while the Hollywood adaptation of the film, “Wicker Park” (2004), directed by Paul McGuigan has a happy ending. How does the play end?

Kim: I don’t want to spoil it, but I like the ending of the play the most. If I was Lisa, I would’ve loved it to end like the Hollywood version but the play really makes the audience to think about relationships.

It was quite new for you to write a play about romance, right? Most of your previous works are quite serious.

Ko: Right. But recently, I had the opportunity to watch the French film again and I suddenly felt this heat inside of me. I only realized after watching it the second time, that love can be so tangled. I questioned how to interpret this type of love and wanted to share that with the audience. This story also had an aesthetic value that is attractive when put on stage as a play.

When you are crazy in love with someone, you don’t think that there could be another woman who is also crazy in love with you. In front of your eyes, you see nothing but her, the one you love, and think only about her. But I wanted to put a little bit more focus on the other woman who loves the man although he doesn’t see her. This kind of a story, I thought, could be better told on stage than on screen.

There are a lot of elements of the past in the film that you have kept in the play. Is there a reason?

Kim: Today, many young people fall in love so easily and that love fades so quickly. Love has also become so instant. I think the non-digital ways of communicating stimulate that true feeling of love we have somewhat forgotten about.

Ko: The lovers try to call each other inside a public phone booth, they wait endlessly on a park bench, they write letters and wait for replies. I think these are the pathos of this play. It’s difficult to feel such sentiments today. Today, you send a message using instant messengers like Kakao Talk and complain why he or she doesn’t reply straight away. That feeling you feel when you long for somebody, or wait for their call, or their letters, has disappeared. I wanted to bring back these forms of communication in this era where artificial intelligence is taking over.