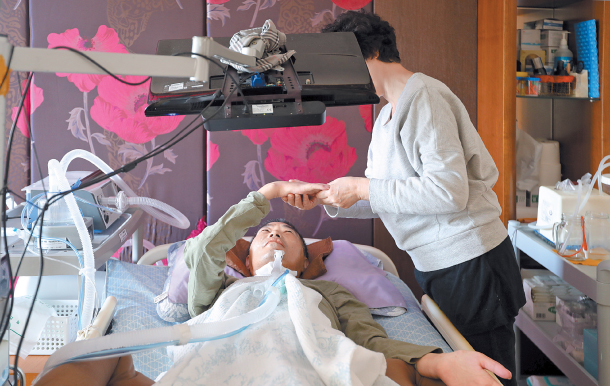 Novelist Jung Tae-gyu’s wife Baek Kyung-ok holds her husband’s hand during an interview with the JoongAng Ilbo while he communicates through his eye mouse screen. [SHIN IN-SEOP]

Amyotrophic lateral sclerosis (ALS), commonly known as Lou Gehrig’s disease, may have stopped many in the midst of their careers, including the American baseball player Lou Gehrig, but it served as a source of inspiration for Jung Tae-gyu, a writer from Busan, to write his eighth book, “You Probably Don’t Know.”

Jung was diagnosed in June 2011. ALS is a progressive neurodegenerative disease that affects voluntary muscle movement, leaving patients unable to carry out daily tasks such as eating and walking. There is currently no cure for the disease.

“You Probably Don’t Know” is a collection of short stories that vividly highlight the struggles Jung went through since the diagnosis. The writer was able to complete his book using an eye mouse, which tracks eye movement to type letters. Forced to quit his career as a high school Korean language and literature teacher, Jung was bed-ridden and felt his only escape was through writing.

The writer had an interview on Tuesday with the JoongAng Ilbo at his home in Baekbeom Street, western Seoul, which his wife Baek Kyung-ok describes as an “intensive care unit.” Jung replied to the interview questions using his eye mouse. 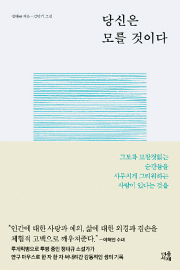 Q. This is the sixth book you wrote. How do you feel about it?

A. This is the eighth book. I also wrote some content (short tales). I am happy about it.

Why did you decide to write a book about your struggles with the disease?

So that other patients might be comforted by it and find hope.

If you could do it, what is the one thing you wish to do the most?

(Jung was referring to the food he wants to eat the most and is said to have particularly enjoyed craft beer. Now, however, he cannot taste them because doctors placed a breathing tube in his windpipe in 2015 and ever since, he has lost his sense of taste and smell.)

In the book, you wrote that patients with Lou Gehrig’s disease live on average between three to five years. This is your seventh year with the disease, and physicist Stephen Hawking has lived 50 years with the disease. Do you still fear death?

I feel at ease. Everyone dies.

As written in the book, do you feel that the physical pain imprisons your mind?

The answer to that question is insignificant now.

Are there moments when you’re happy?

(Jung has over 5,000 friends on Facebook, watches around two to three movies a day and has a collection of 7,080 songs.)

Are there moments when you get angry?

When I get into an argument with my wife.

(Baek explained that before her husband’s diagnosis, they rarely fought, but after, they argue more often.)

What meaning does writing have in your life?

(To answer this question, Jung referred us to page 74 in his book, which reads as follows.)

I was always slow to answer whenever I was asked this kind of question. Writing a novel is a genuine play with oneself and is the ultimate confirmation of my existence. The meaning of life is to communicate your pain, sadness and happiness with others. I am now fulfilling my wish to be a full-time writer. As I am trapped at home all day, the only thing I have is time, and therefore have no choice but to immerse myself in writing.

Do you have a goal or a wish?

To complete the novel that I am currently working on.

Do you think life is unfair, or do you feel relatively happy now?

The answer to that question is insignificant now.

What has been the most rewarding experience in your life?

If you were reborn, would you get married to your wife again?

(To answer the question, Jung referred us to an email interview he did with Kookje, a newspaper in South Gyeongsang, last fall.)

“To the patients with Lou Gehrig’s disease: we are not dead yet. Let’s lead our life while resisting and affirming death at the same time. I pray for God’s blessing upon another writer who is currently fighting against pancreatic cancer.”

Under the title of his book, “You Probably Don’t Know,” Jung informs his readers what they probably do not know: “That there are people who poignantly miss those moments that seem so trivial.” Even though Jung so poignantly desires to take part in simple activities, such as talking over a cup of coffee at a coffee shop or pedaling freely on a bike, he explains he is learning to be at peace with himself.