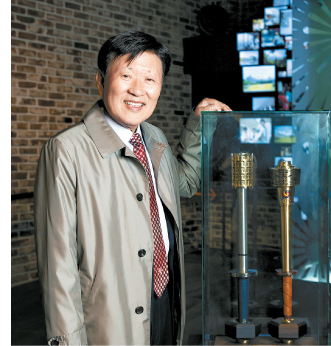 Min Byoung-man, former head of Hanwha Historical Museum, with the 1988 Seoul Olympics torches he was in charge of producing. [HANWHA]

On March 19, 1987, employees of Hanwha Group, then Korea Explosive Group, stormed into the office of the Seoul Olympics Organizing Committee in Bangi-dong, eastern Seoul, holding the Olympic torch wrapped in newspaper.

The torch was engraved with two yellow dragons and had 24 holes, designed by the late Lee Woo-sung, professor of fine art at Sookmyung Women’s University.

But due to disputes over materials and production methods, the torch was not ready on time and the one unveiled to the public at a press conference was a hurriedly produced mockup.

To make it look like real, the Korean team working on the torch used nail polish to make it shiny, sanded down the space between the grip and brazier and painted the Olympic emblem using watercolors.

Min Byoung-man, who was in charge of all the field operations and formerly headed Hanwha Historical Museum, recalled during an interview on Wednesday “the excessive passion of the torch manufacturers from the corporate sector and academia, who had no technology or experience.”

That day, the flame for the PyeongChang Winter Olympics arrived in Korea.

Min worked at Hanwha’s fireworks developing team, established in 1984, and took part in the production of the 1986 Asian Games in Seoul.

Min says the way the torch is lit today differ from how it was done in 1988. Then, the torch used phosphorus, manganese dioxide and magnesium.

The International Olympics Committee asked that the flame be robust, so they used highly flammable chemicals. Even after the torch was soaked in water, it was easily relit.

When such chemicals burned together, it produced both orange and white flames.

“We had to consider not only the weight, length and design as well as the fuel and material of the torch, but also produce the torch in a way that it could deliver the flame to the cauldron to light the Olympic flame,” said Min. “I took pride in the fact that the IOC staff told us the flame we created was the most fantastic in history.”

Hanwha has again produced the torch for the PyeongChang Winter Olympics, using gas this time instead of chemicals, and officials say the smoke from the torch is not polluting.

Whereas the conglomerate produced 3,300 torches for the 1988 Olympics, it produced 9,600 this time around.

“Olympic torches move to the next location thanks to the sacrifice and efforts of many people, and stay lit through the closing of the Games,” Min said. “The external flame brings passion to the athletes and people around the world.”