LKP kicks former president Park out of the party

LKP kicks former president Park out of the party 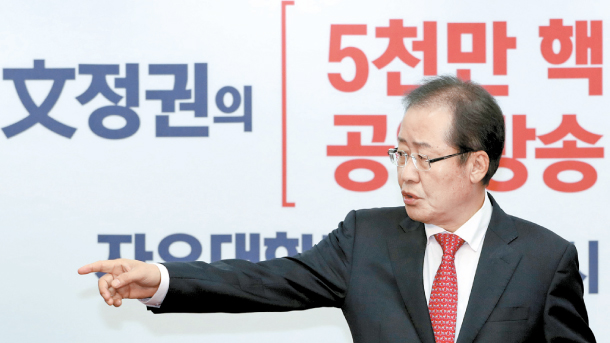 The Liberty Korea Party on Friday kicked out former President Park Geun-hye, severing 20 years of ties with the disgraced leader in a move aimed at a merger of conservative parties before June’s local elections.

“I made a decision on Park’s party membership for the sake of the future of the party and our country,” said Chairman Hong Joon-pyo of the Liberty Korea Party (LKP) in a press conference. “Starting today, her membership vanishes.”

While praising the former president for her earlier political accomplishments, Hong said he had no choice but to expel her because the LKP can’t continue to be associated with the disgraced leader. Park, impeached in December and removed from office in March, is currently standing trial for receiving bribes from conglomerates during her presidency.

“The reality is cruel,” Hong said. “The liberals are extending [Park’s] detention and operating a political trial in order to take advantage of the issue until next year’s local elections.

“They keep labeling the LKP Park’s party in order to annihilate the conservatives,” Hong continued. “We have no choice but to throw off the yoke of being Park Geun-hye’s party.”

Last month, the party’s in-house ethics committee recommended Park voluntarily leave the LKP, but she did not respond. The Supreme Council held a meeting Friday morning to discuss her fate, but no vote took place. Instead, LKP leaders asked Hong to decide.

“We can’t wait any longer. If we do not make a political decision at such an important moment, larger chaos will come,” Hong was quoted as saying by Khang Hyo-shang, spokesman of the party. “I will take responsibility for my decision.”

According to Khang, LKP leaders discussed the issue for about 80 minutes. Of the nine members on the Supreme Council, opinions were reportedly split. Four members including Rep. Kim Tae-heum are considered Park loyalists.

Kim said he never agreed that Hong alone should make the decision. “I will hold him legally and politically accountable,” he said.

For two decades, Park has been an icon of Korea’s main conservative party. Ending her seclusion after the 1979 assassination of her father, strongman Park Chung Hee, Park started a political career in 1997 by joining the Grand National Party, a predecessor of the LKP. She won a 1998 National Assembly by-election in Daegu and three more legislative elections on the conservative party’s tickets.

Park’s exit will add momentum to a conservative merger advocated by Hong. The 20-member Bareun Party, created earlier this year by anti-Park representatives who defected from the LKP, is currently split about the idea of reuniting with the LKP.

A group of lawmakers led by Rep. Kim Moo-sung said they would return to the LKP if Park was expelled. There are up to eight representatives who are expected to join the LKP.

Another faction led by Rep. Yoo Seong-min says they must put more efforts into strengthening the party to make it the top conservative party.

The Bareun Party will hold a convention on Nov. 13 to elect new leadership, but Kim’s faction will likely leave early next week and join the LKP. Bareun lawmakers will hold a meeting on Sunday to address the issue, but a split appeared to be destined.

Hong has been pushing for the conservative merger as a strategy for June’s local elections, urging Bareun lawmakers to join the LKP before their leadership election. If successful, the merger will bolster Hong’s control over the party, once dominated by Park loyalists. Hong’s power, particularly his authority in making nominations, will be protected from challenges by the pro-Park faction.

Hong already had experience of a bitter defeat in a power struggle over nominations.

In 2011, he won the chairmanship of then ruling Grand National Party, the predecessor of the Saenuri Party, to head the party in the months leading up to legislative and presidential elections in 2012. He resigned after six months because of challenges by major factions, including the Park loyalists.

An emergency leadership was formed and Park was named the acting chairwoman. She successfully revamped the conservative party and won the presidential election of 2012.

Over the past years, Hong recruited more allies and invested in his political career. He was the LKP’s presidential candidate in May, although he lost to liberal frontrunner Moon Jae-in by a significant margin.

Despite the defeat, Hong still won the party chairmanship in July. He made the first mention of kicking Park out of the party on Aug. 16 during a meeting with party members in Daegu, the political home base of the disgraced president. The ethics committee recommended Park’s expulsion last month.

As a conservative merger appeared imminent, a rocky road is ahead for the ruling Democratic Party. Rep. Woo Won-shik, floor leader of the Democratic Party, proposed to the People’s Party and the Bareun Party to create a policy consultative body to form a legislative alliance against the LKP.