Choi Go-woong won the KPGA Tour’s last tournament of the season on Sunday, topping the Caido Series 8 at the Solmoro Country Club in Yeoju County, Gyeonggi, with a come-from-behind victory. 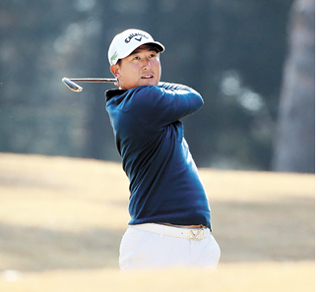 Choi Go-woong watches his shot during the final round of the Caido Series 8 tournament at the Solmoro Country Club in Yeoju County, Gyeonggi, on Sunday. [YONHAP]

Choi entered the final day tied for fifth and three shots behind leader Maeng Dong-seob. With one eagle, five birdies and a bogey in the final round, Choi successfully lifted up his first career trophy after playing 44 KPGA tournaments.

Starting with a birdie, Choi quickly got in the circle to compete for a win, as he made four birdies in the first six holes. Though he started with a bogey in the par-four 10th, Choi didn’t let go of his chance of winning, making another birdie on the par-four 15th by making a long putt.

It all came down to the par-five 16th, where Choi made an eagle to get two shots ahead of Maeng and Lee Seung-taek.

While the three were tied for the lead at nine under par, Choi’s tee shot on the par-five 16th went into the bunker. But Choi’s second shot out of the bunker was his lucky shot, as he got it on the green 10 meters (10 yards) from the flag.

Then, with an eagle putt, Choi took a sole two-shot lead.

“When I saw the leaderboard, I was tied for the lead,” Choi said. “So I decided to get it on two. I grabbed my hybrid. When I hit it, I thought it was going to be short, but I was lucky. I told myself to just make a birdie, but once the eagle putt rolled in, I thought I could win.”

As Maeng and Lee, who played a group behind Choi, failed to make birdies, Choi’s chance of winning grew, and once he finished the last two holes with pars, Choi was declared winner of the KPGA Tour’s last tournament of the season.

“I’m happy I had my first professional win in the season’s last tournament,” Choi said. “I always thought the winner was set, and since there could only be one winner, no matter how much I tried, I wouldn’t be able to win if it wasn’t meant for me. But this time, it was me.”

Choi turned professional in 2010 and joined the KPGA Tour in 2012 after playing two seasons on the Challenge Tour. Throughout his career on the tour, his best finish on the money list was 66th. Last year, Choi barely kept up his tour stats, finishing 82nd on the money list.

This year has by far been his best. The 30-year-old golfer had four top-10 finishes this season, including the victory this weekend.

Since this was the last tournament of the season, Choi Jin-ho, who finished tied for seventh at six under par, won the Genesis Player of the Year award, becoming the first player in 14 years since K.J. Choi in 2003 to win it for two consecutive seasons.

By winning Player of the Year, Choi has earned a status card for the European Tour as well as a 100 million won bonus and a Genesis car.

“My first goal for the season will be to maintain my seed for the following season,” Choi said after earning his card. “I’ll need to gain more distance and improve on my putting and short game. I’ll also need to adjust to the course and find a new foreign caddie.”

Since the points for Player of the Year were distributed based on standing after each tournament, it was undetermined until the end of the Caido Series 8 on Sunday. Choi and Lee Jung-hwan both started the day tied for ninth at three under par. Lee finished the tournament tied for ninth, which placed him as runner-up in Player of the Year. He took home a 50 million won bonus, but no Genesis.