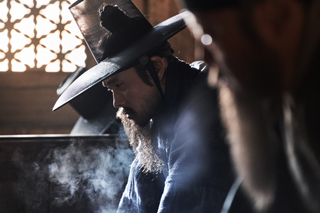 In the movie “The Fortress,” which dealt with the Joseon court’s desperate struggle for survival in the face of the Qing invasion in 1636, Minister of Interior Choi Myeong-gil insists on making peace with the rising Qing rather than respecting the declining Ming in China. [CJ ENTERTAINMENT]

It is frustrating and annoying to see the politicians forever bickering and fighting amongst themselves, heedless to the challenges of our times. The pitiful state of Korean politics stems from the deep factiousness in our society. It may not be an individual or a group’s fault. Our turbulent history and divisive legacy might have made us suspicious and discordant. We may have to do some soul-searching by exploring what thoughts have helped to shape our society.

A recently released epic study of the Korean race — “Making of a Korean: Part 1” by political scholar Hahm Chai-bong — could be a start. Dr. Ham, president of the Asan Institute for Policy Studies, says the identity of the Korean race cannot be defined by one or two unchanging characteristics. The identity of a race is reshaped by each contemporary generation. He cites American anthropologist Clifford Geertz, who said, “Man is an animal suspended in webs of signification he himself has spun.” To define a Korean or who we are, we must first investigate what our “webs of significance” have been. That has become the purpose of Ham’s expansive anthropological study of Koreans.

He parsed the making of the Joseon people through the creation of Joseon from Goryeo in the late 14th century. When the Joseon era came to the end in the late 19th century, he went on to investigate modern Korean people until the late 20th century. In the process, he identified pro-China conservatives, pro-Japan reformists, pro-American Christians, pro-Soviet communists, and ethnic nationalists. The five characters blended into a Korean persona.

Dr. Ham’s analysis was refreshing and bold. The Korean anima could be comprehended by looking at the political, international and ideological contexts of the five types of groups. Studying the Korean people and their traits in the context of social dogmas that panned out over several generations can be not only interesting and insightful but also can suggest the cause of the divisiveness in our society.

The building of generational dogmas have been influenced by external factors. For instance, King Sejong 600 years ago displayed excellent leadership by benchmarking the Ming dynasty, which emerged as a global power by combining the economic and political systems of the Song Dynasty — which became the world’s richest in the 11th century through upgraded farming methods, steel production, and inventions like the compass — with neo-Confucius thought of the times to build a new foundation for Joseon government and society.

Partly because of its geography, Korea suffered a lot during transitional periods in the international order. Koreans became more inwards during the time China rose to a hegemonic power through wars with Japan. The aggressions of Japan in the age of imperialism in the late 19th century turned the Hermit Kingdom people to independence movement activists.

120 years later, Koreans face an epochal turning point in the international order after they lost sovereignty, became colonized and were divided in a war. Ethnic Koreans, including those who spread out to various parts of the world after they lost their country in the early 20th century, number over 80 million today. The people in South Korea have built this nation as a democratic and multi-racial society with pride in freedom, human rights and our cultural legacy. We no longer insist on a homogeneous society, but consider ourselves a proud member of the global community. We must polish our democracy based on diversity and inherit our ancestors’ passion and devotion to the nation to overcome our weakness of divisiveness and become strong defenders of this land.