The oil painting titled “Jump,” which is 12 meters wide and 2.5 meters tall (39.4 feet wide and 8.2 feet tall), is located in the first floor lobby of Ministry of Foreign Affairs building in central Seoul. [JOONGANG ILBO]

A Korean proverb says that “If it ends well, it’s my doing. If it doesn’t, it’s the ancestor’s fault.”

In the lobby of the building that houses the Ministry of Foreign Affairs (MOFA) in Doryeom-dong, central Seoul, one “ancestor” can’t be missed. While it silently guards one side of the lobby, it has always been blamed when something bad happens to the ministry. This ancestor is not a person, but actually a huge painting standing at 2.5 meters tall and 12 meters wide (8.2 feet tall and 39.4 feet wide).

This oil painting, titled “Jump,” depicts 20 horses freely running through a field. In December 2002, when MOFA moved to a new building in the Central Government Complex, the Ministry of Government Administration and Home Affairs asked the Korean Fine Arts Association for a brand new painting to be hung in the building’s lobby. The painting is the work of Western-style painter Oh Seung-woo, and was commissioned for 250 million won ($221,560).

The painting will soon say goodbye to the MOFA building after standing its place for 15 years. According to MOFA, “During a recent inspection, it was reported that parts of the painting have started to deteriorate. It will be moved to a different location for further inspection and necessary measures [will be taken] to preserve it.”

MOFA employees had conflicted feelings when it was announced that the painting would be making its exit soon. While some would miss the painting which guarded the lobby of the ministry for so long, many are glad to see the painting go.

Within the ministry, the painting of 20 horses running in different directions was known by its nickname “Honbibaeksando,” which translates to “being frightened out of one’s senses” or “total chaos.”

Common criticisms of the artwork included, “The horses’ heads turning in different directions are scattering the concentration of MOFA,” and “The picture precisely depicts the current state of MOFA - distracted and chaotic like the horses in the painting.”

Ban Ki-moon, then-minister of foreign affairs and trade (2004-2006) also referred to the painting at a press conference of August 2004. “Forgive me for commenting on this, but I believe that painting may be giving off a negative aura, distracting MOFA from doing what needs to be done. Since the horses are facing different directions, MOFA seems to be having trouble deciding its path,” he said.

“Instead of this painting, there should be a more positive picture about dreams and hope.”

The ministry even tried to remove the painting after years of criticism, but there was still time left in the contract that the Ministry of Government Administration and Home Affairs signed that required the work to remain in its place. During the Lee Myung-bak administration, the Ministry of Foreign Affairs tried to recover the painting’s fallen reputation, calling the painting a representation of the new administration’s aim to heighten the nation’s international stance by progressing vigorously in all areas. The ministry also gave the piece a new nickname - “Gakgaeyakjindo” - or “individuals each making great advances.”

Although “Jump” is the piece of art that gets the most attention, there are a surprisingly large number of rare masterpieces hidden in the corners of the MOFA building. The works displayed throughout the building introduce Korean culture and strengthen the country’s image for the many foreign guests and dignitaries that visit MOFA.

The ministry owns over 4,000 pieces of art and their total value reaches an estimated 14 billion won. One of the more influential works is “Sansuwha” by the famous artist Yi Sang-bom (1897-1972), which is located on the 17th floor, next to the foreign minister’s office. Sansuwha is a form of painting drawn in black ink using a specific brush. Yi is a celebrated artist who established a gateway for oriental painting in Korea. The painting is known to be the longest picture ever to be drawn by Yi. It’s one of the highest-valued pieces in the MOFA building, with an estimated value of 500 million won. 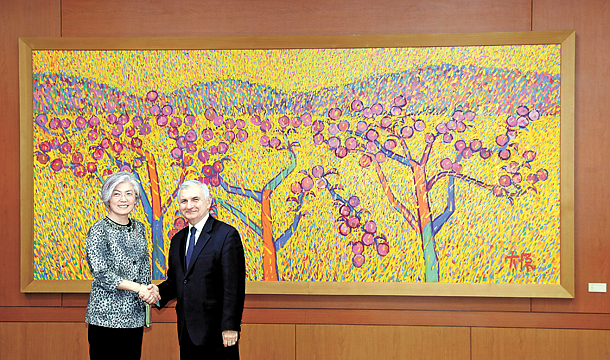 After passing by “Sansuwha,” and upon entering the main reception room, another enormous oil painting titled “Plantation” by the artist Lee Dai-won (1921-2005) is on display. The picture depicts Korea through colors that bring out the vivid and energetic atmosphere of the country. All of the previous ministers have taken pictures with foreign guests in front of the painting.

In the vice minister’s reception room on the 17th floor, an enormous photograph of Mount Jiri printed on paper similar to hanji (traditional Korean paper handmade from mulberry trees) takes up the entire side wall.

On the very top floor of the building, a work by visual artist Han Sung-pil titled “Illusionary Pagoda” hangs in the reception hall. The three-storied pagoda in the picture actually stands on a site once occupied by the historic Buddhist temple “Gameunsa,” created by the order of King Munmu (661- 681) from Silla dynasty (57 B.C. - 935 A.D.). Like the title suggests, the pagoda in the photograph is an illusion. The work is part of Han’s “Facade Project,” in which he takes a picture of the printed cloth that covers buildings that are under construction. The project started in 2004 while he was studying overseas in London, when he saw an image of the Saint Paul’s Cathedral printed on the cloth covering the building during its construction. That was when he picked up his camera and began his project.

Although the cloth is a mere illusion of the real building, simultaneously it is also real because it is the form that exists in the present, while the original is hidden under the cloth. While the cloth creates a fake version of the structure, it is also real in a sense. Han tried to capture that ambiguous boundary between what was fiction and what was real through his photos. The photographs in the series feature a colorful and rich visual language, entertaining the eyes of their audiences.

MOFA decided to hang this picture inspired by King Munmu, who once said, “I will protect my country even after my death by becoming a spiritual dragon,” showing his strong determination for national security.

In the official residence of the Minister of Foreign Affairs, located in Hannam-dong, central Seoul, there are also multiple significant works on display. After the inauguration of Minister Kang Kyung-wha, a few changes have been made to change the atmosphere of the home to fit the new minister’s taste.

The first major changes were made to the building’s entrance. On the table where guests stop to leave messages in the visitors’ log, a folding screen of chaekgado (paintings of traditional bookshelves) titled “Scholar’s Accoutrements” now stands, replacing King Jeongjo’s (1776- 1800) Ilwaldo (the folding screen which stood behind the King’s throne in the palace and represented the authority of the throne). “Scholar’s Accoutrements” is a painting of books neatly placed and distributed on bookshelves. This particular piece was created by Master Artisan of Buddhist Painting Lim Suk-hwan.

The “Scholar’s Accoutrements” series originated from “Studiolo” paintings, which are drawings of the bookshelves in personal libraries popular in Italy during the Renaissance era. The trend spread to the Qing Dynasty and King Jeongjo is credited with bringing the paintings to Joseon. One of the reasons for installing the painting in the minister’s residence was to commemorate King Jeongjo’s openness toward globalization.

Some of the heavier abstract paintings were taken out of the residence while a series of new paintings were introduced, such as a black-and-white drawing of the Seoul titled “Breath-Yeouido” by artist Park Byung-Il. According to a MOFA insider, they focused on making the environment as comfortable as possible for Kang to engage in diplomatic activities as it is a place where many important diplomatic ties are formed.

What about other foreign ministry buildings around the world? In Washington, a series of different countries’ flags are hoisted along the walls of the U.S. Department of State’s lobby. On the seventh and eighth floors, portraits of previous Secretaries of State hang on the wall.

At the Ministry of Foreign Affairs in Tokyo, photographs of foreign ministers attending events and other activities hang in the first floor lobby. In the back of the building stand statues of honored diplomats.

At the MOFA building in Seoul, there are no portraits or statues of previous ministers. Instead, at the back of the 18th floor’s reception hall, there are framed photographs of previous foreign ministers hung along the wall.

“According to Confucianism, especially in Korea, it is the tradition not to create statues or figures of people,” said Sun Seung-hye, the director of Cultural Cooperation Division at Ministry of Foreign Affairs. “In the Joseon Dynasty, the kings bestowed portraits of his officials in uniform only to appreciate or praise them.”

The pictures of the past ministers on the 18th floor act as “contemporary portraits of officials wearing their official uniform.”