Up to 1.62 million loan seekers may be denied

Up to 1.62 million loan seekers may be denied 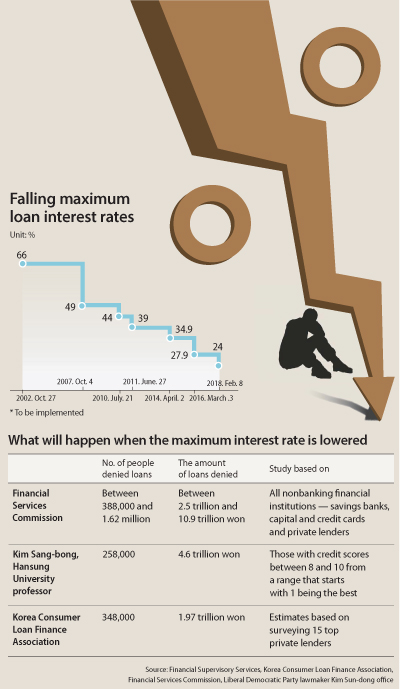 At least 388,000 and up to 1.62 million loan seekers will be deprived of loans from nonbanking financial institutions due to tougher evaluations and some private lenders shutting down, according to an estimate by the Financial Services Commission.

This is almost as much as the 1.82 million who already have such loans, 1.25 of whom took them out last year.

But other estimates have been more conservative. Kim Sang-bong, an economics professor at Hansung University, said at least 258,000 will be denied loans, while the Korea Consumer Loan Finance Association, in surveying the top 15 private lending companies, came up with an estimate of 348,000 denials due to the maximum legal interest rate being lowered, a figure that will go up when private lenders fold or shrink.

During his election campaign, President Moon Jae-in promised to lower the legal maximum loan interest rate to 20 percent to ease loan burdens for people with low credit scores, a move the loan industry has been opposing, but for now, the government has settled at 24 percent, a decision that was passed during a cabinet meeting at the end of last month.

But the situation has been turning around with the Korean central bank under pressure to raise interest rates amid a steady recovery of the nation’s economy, which is expected to post 3 percent annual growth by the end of this year. There are already expectations building of a rate hike as early as this month.

“The industry will be faced with double the problems if the key interest rates are raised while the interest rates on loans are forced to be lowered,” said Lee Jae-sun, secretary general of the Korea Consumer Loan Finance Association. “Loans supplied by private lenders will be undeniable, but the issue will be how much it will shrink.”

Some of the nonbanking financial industries are already under pressure by the government to lower their loan interest rates. One of these is the credit card industry.

For a loan with an annual interest of more than 20.1 percent, a 27.3 percent interest rate is imposed when the return of the loan is late for a month. That rate goes up to 27.6 percent when it is late for three months, and then to the maximum 27.9 percent.

The government is hoping to lower the initial interest rates on loans to 10 percent. If it does, late-payment interest rates will also be lowered. Most of the people who use credit card loans have unfavorable conditions, such as low credit scores or multiple loans.

According to the Financial Supervisory Service, as of the first half of this year the balance on loans borrowed from credit card companies amounts to 24.4 trillion won ($21.5 billion). Those who borrowed from multiple loan borrowers with three or more loans accounts for 60.9 percent, or 14.9 trillion won.

As it has become tougher to get loans from financial institutions, there are concerns that those with lower credit scores will turn to illegal lenders. The government hopes to prevent such effects and is working on measures scheduled to be announced next month.

One of the major measures that the government is looking into is tightening surveillance and investigations against illegal lending, while also planning to expand the policy finance provided by state-owned financial institutions for those with low credit scores who are denied loans by private financial firms.

In 2010, Japan lowered its maximum legal interest rates from 29.2 percent to 20 percent. Although the actual implementation of this had a grace period of three and a half years, it resulted in many of the major private lenders shutting down businesses while those with low credit scores flocked to illegal lenders. As a result, the Japanese government forced the four major financial holding companies to take over the major private lenders. Recently, major Japanese banks have been offering loans to people with low credit scores with a 15 percent interest.

“One of Korea’s strengths is that the nonbanking financial industry is better developed than Japan’s,” said Jung Hee-soo, a researcher at Hana Institute of Finance. “We need measures where nonbanking financial companies expand loans to those with low credit ratings, as well as raising the support of government-led loan policies.”

The loans that the government will be offering, however, will be limited to those with an annual income of less than 35 million won. But those without jobs or those with overdue loans will be ineligible.