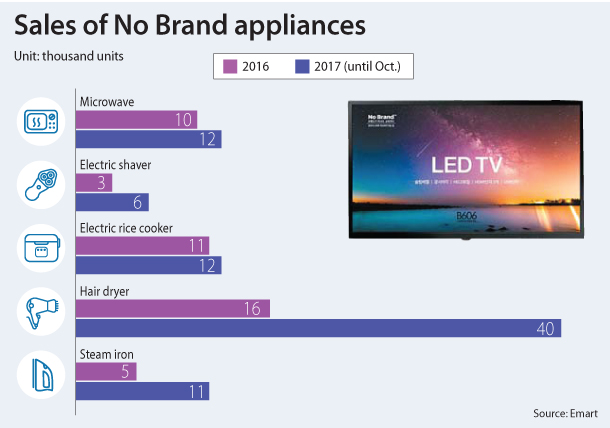 Cheaper home appliances with minimal features are becoming a new trend in the local market.

A 32-inch television sold by Emart’s in-house label No Brand is one typical example. The TV comes without a WiFi connection, which is a basic feature included in other recently released models. Instead, the TV earned a grade 1 energy efficiency rating by minimizing electricity consumption. The price is set at 199,000 won ($179), which is about 100,000 won cheaper than similar models released by major electronics giants in the country.

The No Brand TV was first released in September and had already 5,500 units by Oct. 20.

“We have made an extra order to our Chinese factory due to a lack of inventory,” a spokesperson from Emart said. “The TV has set the record for selling the largest number in the shortest period of any of the products since we first introduced our ‘minimal’ home appliances in 2015.”

No Brand’s air fryer, released on Sept. 13 with a price tag of 49,800 won, also performed well, selling over 3,000 units by Oct. 20. The air fryer also has minimal features - only buttons to set temperature and time. Air fryers from small kitchen appliance companies usually cost between 150,000 and 300,000 won.

A so-called minimal microwave with only basic functions - defroster, heating and a timer - has sold 12,000 units so far this year, already surpassing last year’s sales record of 10,000 units.

Emart’s corporate management is paying close attention to sales of No Brand TVs. While Emart has been focusing on smaller appliances like toasters and electric rice cookers, the popularity of their TVs proves that simple functions and a cheap price is a formula that also translates to larger appliances.

“As single and two-person households account for half the Korean population, customer preference is leaning towards practical products that focus on offering only the core functions at a reasonable price,” said Kim Hyung-soo, a director for Emart’s lifestyle development team. “We plan to expand No Brand’s appliance business to include larger home appliances as well.”

Such trends can also be spotted at major appliance retail companies. As of Oct. 24, one public shopping channel had reaped in 8 billion won from TV sales so far this year. The revenue already exceeds last year’s 4.54 billion won annual sales revenue by 76 percent. The revenue boost was mainly led by minimalist TVs with simple functions, according to the home shopping channel.

“Products from small and midsized enterprises that come with only core functions are leading revenue gains,” a spokesperson from the channel said.

HiMart’s small air conditioner released in January was a big hit. Over 7,000 units had been sold by the end of summer this year. The first batch of 1,500 small washing machines with a 6 kilogram capacity sold out in just two months. ET Land also released its own branded appliances including a 40-inch TV and an air conditioner with simpler functions and a lower price.

As minimal appliances become increasingly popular, premium appliance makers like Samsung Electronics have decided to go in the opposite direction, banking on their competitive edge in the premium sector. The Korean electronics giant plans to reduce its medium to low price TV line-up and bolster its higher-priced segment.

“We are reforming our product line-up,” a spokesperson from Samsung Electronics said. “We will be cutting production of 20 to 30-inch medium-to-low price TVs with an aim to ultimately exit the market.”

The home shopping industry is also split down the middle, with some companies leaning toward high-value premium products and others investing in cheaper, simpler appliances.

In June, Hyundai Home Shopping Network released its first in-house home appliance, an air cooler. An air cooler is an efficient substitute for air conditioners that combines electric fans and vapor-cooling technology. The company’s simple air cooler sold of over 2,800 units in only 39 minutes.

Lotte Home Shopping, on the other hand, has been aggressively pushing premium home appliance brands from overseas. After the company exclusively brought Dyson vacuum cleaners to Korea in July 2013, over 160 billion won has been spent on the British company’s products here as of October this year. Lotte sold out of 3,350 units of the 978,000 won V8 Carbon Fiber Dyson on the day it launched last month.