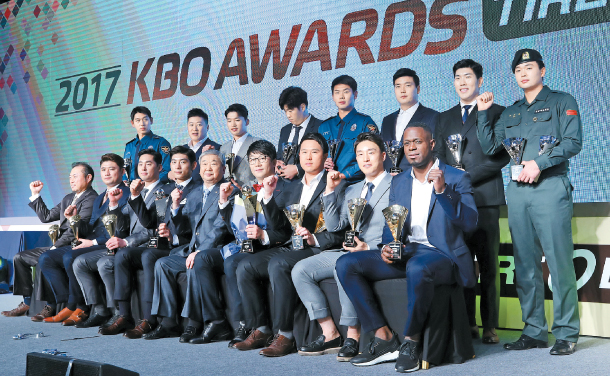 The 2017 regular season MVP Yang Hyeon-jong of the Kia Tigers, sixth from left in the front row, and the awardees pose for a picture after the 2018 Tire Banks KBO awards ceremony at the InterContinental Seoul COEX on Monday. [YONHAP]

Yang also won the Korean Series MVP honors as the Tigers claimed their 11th championship on Oct. 30. He’s the first player to win both MVPs in one season in the KBO’s 35-year history.

But Yang isn’t about to stop.

“I’d still love to lead the league in strikeouts before I retire,” said Yang, who ranked third this year with 158 strikeouts. “And also, my ultimate personal goal is to have my number [54] retired.”

Yang has won two championship rings with the Tigers - in 2009 and this year. That first title ended a 12-year drought, and this one came eight years after the previous title.

“It’d be great to win multiple titles in a row,” Yang said. “That way, everyone will be scared of playing us. I’d like to help this team become the most feared club in the league.”

In the MVP voting, Yang’s Kia teammate, right-hander Hector Noesi, finished third with 208 votes on five first-place votes. Noesi also won 20 games, but had a slightly higher ERA than Yang with 3.48 and nine fewer strikeouts. Yang thanked Noesi for pushing him throughout the season.

“We were locked in a friendly competition,” Yang said. “Without Hector, I would have settled for just setting my career highs. I tried hard not to lose against him, and he really motivated me.”

Yang signed a one-year deal before the 2017 season but promised to his fans that he’ll be back in the Tigers’ uniform in 2018.

“I tried to picture myself in a different uniform and I decided I wouldn’t look good in it,” Yang said. “I’d love to win another championship for our fans next year. I love being around my teammates and I’d love to stick around to make another run at the title.”

As no surprise, Lee Jung-hoo of the Nexen Heroes won the Rookie of the Year, receiving 98 out of 107 first-place votes. By winning the rookie of the year award, Lee became the third player in the Heroes’ history, since Seo Geon-chang in 2012 and Shin Jae-young in 2016.

“I’d like to thank my coaching staff for putting me in the lineup all season,” Lee said after accepting the award. “I also learned so much from my teammates. They offered me great advice all season long. I’ll try to become an even better player next year.”