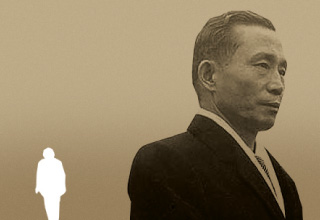 The moment former President Park Geun-hye, the honorable No. 1 member of the Liberty Korea Party, was kicked out of the conservative party, the era of “copycat Park Chung Hee” finally ended. Park Geun-hye was a pure liability. She won the presidency only because she was misunderstood as the second coming of her late father, Park Chung Hee.

Strongman Park Chung Hee’s 18-year reign can be characterized as having early, middle and late stages. The first two-and-a-half years, when he won power through a military coup and ruled the country as chairman of the Supreme Council for National Reconstruction, was a period of trial and error. He took his predecessor’s five-year economic development plan and implemented it, but failed to achieve its goal. Currency reform was frustrated and poor crops added hardship. Nothing went smoothly.

Breaking his promise to hand over the government to a civilian leader, Park ran in the presidential election and became president in October 1963. The country experienced a golden period of economic development until October 1972, when Park started a dictatorship.

Until his assassination on Oct. 26, 1979, the final years of Park’s rule were a dark period when he only concentrated on maintaining his dictatorship. Unfortunately, it was in 1974 that Park Geun-hye came to serve as the first lady at the age of 22 on behalf of her assassinated mother. Her father was no longer the sharp leader from the golden period who implemented a meticulously planned national development strategy based on a strong sense of balance and restraint. At the time, he abused the constitution by issuing martial law and emergency orders. This is why Park Geun-hye became a bad copycat of Park Chung Hee.

If she had met the good Park Chung Hee of the golden period — who embraced criticism and used his ability to mend ruptures and resolve conflict — her tragedy would have not happened. After winning the presidency, Park Chung Hee even recruited Dong-A Ilbo President Choi Tu-sun, a leading critic of his rule, as the prime minister. He is the younger brother of the famous author and historian Choi Nam-sun.

Lee Han-lim, who opposed Park’s military coup and tried to suppress it, was named the construction minister. Sogang University Professor Nam Duck-woo, also a strong critic of Park, was named the finance minister and the minister of economic planning. Park gave him complete authority over economic affairs for nine years and three months. It was a truly bold strategy.

In a drastic contrast to her father, Park Geun-hye blacklisted a minister and fired a prosecutor-general when they had different opinions. She recruited only those hailing from Gyeongsang to head top posts in the government, judiciary and legislature. During her term, eight out of 11 top officials, including two National Assembly deputy speakers, were from the Gyeongsang region. Park Chung Hee never used a Gyeongsang leader as a prime minister, but his daughter never had that sense of balance. Park Chung Hee, until his late period, never relied on the people from a particular region. He made powerful government organs check each other for the sake of the healthy operation of the country.

The great appointment strategy of Park Chung Hee, however, faded as he ruled longer. Kim Jae-kyu, head of the Korea Central Intelligence Agency who assassinated the strongman, and Kim Kye-won, Park’s last chief of staff who witnessed the assassination, were both Park’s military juniors from the Gyeongsang region. Park Geun-hye relied heavily on her longtime confidante Choi Soon-sil and her three “doorknob” aides probably because she learned from her father during his dark period, not during his golden period.

President Moon Jae-in entered the Blue House without going through decades of hardship like former presidents Kim Young-sam, Kim Dae-jung and Roh Moo-hyun. Park Geun-hye’s repeated failures offered the best opportunity to Moon. Moon must be very cautious about not becoming another copycat of Park Chung Hee. And yet, he pushed forward naming Hong Jong-haak as the minister of SMEs and Startups, despite his dubious wealth transfers and controversial remarks. It appeared that Moon has forgotten the reason why the people elected him.

Moon actually violated his own five principles of making appointments. It is no wonder his appointments are criticized for being overly biased. Moon’s repeated appointments based on the spoils system show that he does not understand why the Park Chung Hee copycat failed.

President Moon must fear the Korean people. The democratic protests in Busan and Masan in October 1979 were the trigger for Park Chung Hee’s assassination. The massive candlelight protests in Gwanghwamun Square helped remove Park Geun-hye from office. Companies are now struggling with the Moon administration’s pro-labor policy, but his Commissioner for the Fair Trade Commission, Kim Sang-jo, carelessly said to other economic ministers, “I am late for our meeting because I had to rebuke the conglomerates.” President Moon must remember the simple truth that his approval rating can plummet in a second no matter how high it is for the moment.

Although Park Chung Hee’s copycat was forcefully removed, the value of the good Park Chung Hee is still valid. He gave true power to the ministers and inspected the outcome of policies by making field trips. He wanted to listen to criticism and even yelled at a close friend who tried to flatter him. He was different from Moon, who is leading the nation with his powerful Blue House aides without listening to the voices of the industries.

Does Moon know why his predecessor failed? If he knows, he must change drastically. Only then can the president open his era of both democracy and a good Park Chung Hee.