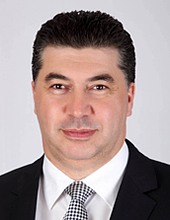 The head of GM’s Korean operation will meet with employees and local dealerships this month in an effort to seek their support amid declining sales and rumors that the automaker might withdraw from the country, a company spokesman said Monday.

Kaher Kazem, chief executive of GM Korea, could also announce a business strategy that includes the launch of new vehicles to boost lackluster sales in Korea, the spokesman said.

This year, GM Korea has suffered a decline in sales due to a lack of new models and tougher competition from local rivals and imports.

On Oct. 16, GM Korea marked 15 years of doing business in Asia’s fourth-largest economy amid growing concerns that it may opt to leave the country in the face of poor performance and high labor costs.

Without denying rumors of an exit, Kazem told lawmakers during a routine legislative audit hearing on Oct. 23 that the company’s executives and employees were doing their best to put the automaker back on track.

In a press event last Wednesday, Dale Sullivan, vice president of GM Korea, did not deny the rumors either and instead stressed it was making investments in the company to diversify its lineup.

Meanwhile, the automaker and its union have yet to conclude this year’s wage negotiations, which have been suspended until a new union leadership is elected in mid-November.

If the two parties resume wage talks later this month, Kazem will meet the union’s leaders to explain the company’s current business situation and seek their understanding, the spokesman said. GM Korea is widely expected to restructure its operations to reduce net losses and seek a turnaround. Possible restructuring measures include the sale of some of its domestic plants and job cuts.

In Korea, GM has four plants, a design center, a technical center and a proving ground for new vehicles. The Detroit-based automaker owns a 70.12 percent stake in GM Korea.

GM Korea’s product lineup lacks competitive sport utility vehicles at a time when global demand for crossovers is on the rise. Cars produced in the country include the Malibu midsize sedan, the Cruze compact and the Captiva SUV.

All GM cars sold in Korea use the Chevrolet marque.