A computer-generated rendering of Hyundai Motor’s 2018 Grandeur hybrid. The new Grandeur is an upgrade of the sixth-generation model released last year and comes with features that were previously only available in Genesis models. [HYUNDAI MOTOR]

Hyundai Motor has upgraded the Grandeur, the automaker’s top seller in the Korean market, with a slew of smart software features.

The 2018 Grandeur, an upgrade of the sixth-generation model launched last November, will come with a number of features that were previously only available in the company’s luxury Genesis models. A semi-autonomous highway assist system will help drivers stay inside lanes and maintain cruise control. Kakao i, an artificial intelligence system developed by Kakao that powers the navigation system of the Genesis G70 sedan, will also be available in the new Grandeur.

After its launch at the end of last year, the sixth-generation Grandeur quickly climbed the charts to become the top-selling model in the Korean market. The introduction of a hybrid model earlier this year further spurred sales. A total of 110,671 Grandeurs, including hybrids, have been sold this year, a Hyundai spokesman said. 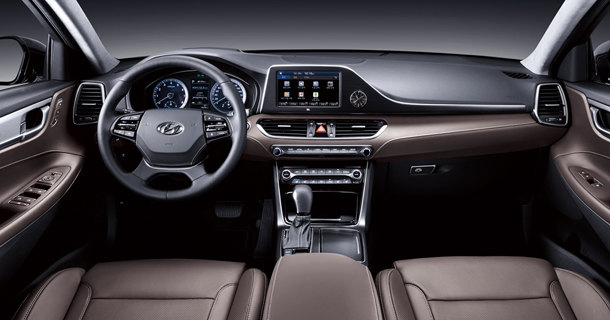 Interior of the 2018 Grandeur. [HYUNDAI MOTOR]

In October alone, Hyundai Motor, Korea’s largest automaker, sold 8,573 Grandeurs, making it the best-selling car in the country that month. If estimated sales for the rest of the year play out, it could become the top vehicle of the year.