New releases no match against the power of ‘Thor’

New releases no match against the power of ‘Thor’ 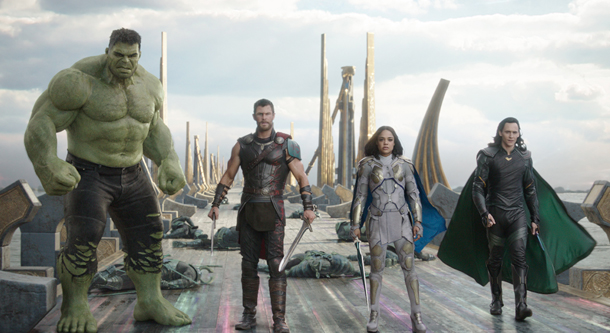 “Thor: Ragnarok” remained powerful atop Korea’s weekend box office while it thundered to one of the year’s best box-office debuts in North America with an estimated $121 million, proving once again the might of the Walt Disney Co.

The third installment of the “Thor” franchise took in 7.12 billion won ($6.39 million) in its second weekend in Korea, selling 834,000 tickets - almost half the 1.58 million tickets sold in its debut weekend.

The robust debut for “Thor” movie in North America was a welcome shot in the arm for Hollywood and theater owners who have suffered through a terrible October at the box office. “Thor: Ragnarok” also bucked the trend of diminishing returns for sequels. The 2011 “Thor” debuted with $65.7 million; 2013’s “Thor: The Dark World” opened with $85.7 million.

“In this business, it’s not often you see the second and third installments in the franchise outpacing the previous issue,” said David Hollis, Disney’s distribution chief. “You don’t expect never-ending returns when it comes to sequels, but it definitely speaks to the quality of the talent at the Marvel Studios team and the way they’re thinking about each film out of the gate.”

“Thor” grossed $151.4 million in its second week of international release, and has, in 10 days, made $427 million worldwide.

In Korea’s weekend box office, comedy film “The Bros” debuted in second with 606,000 admissions sold. Megabox Plus M’s latest release, starring Ma Dong-seok and Lee Dong-hwi, is a heartwarming family comedy revolving around a senseless Seok-bong (Ma) and his down-to-earth younger brother (Lee), both of whom risk going against their family’s traditional value for the sake of getting what they want.

Another new release, “Heart Blackened,” landed at fourth. Despite the star power of actors like Choi Min-sik and Park Shin-hye, the CJ E&M-distributed movie sold a mere 239,000 tickets in its debut weekend. The drama centers on a wealthy mogul (Choi), whose life suddenly turns around after his daughter becomes the prime suspect in the murder of his fiance. Park plays the daughter’s lawyer.

In North America, STX Entertainment’s “A Bad Moms Christmas,” opened with $17 million over the weekend. The sequel, which stars Mila Kunis, Kristen Bell and Kathryn Hahn, came in shy of the original’s $23.8 million opening.

It’s often been feast or famine this year at the box office. August was historically dismal, September swung to record-breaking highs, and October again badly slumped with the lowest overall gross in a decade. The year is running down 4.8 percent off last year’s record pace according to comScore.

Paul Dergarabedian, senior media analyst for comScore, expects November will, thanks to “Thor,” Warner Bros.’ “Justice League” and the Disney-Pixar release “Coco,” swing back up.

“It’s like a tennis match. We’re up. We’re down. It’s not for the faint of heart,” Dergarabedian said.

Waititi, 42, is a veteran of the cult comedy series “Flight of the Concords” and has previously directed largely offbeat irreverent indies like the deadpan vampire tale “What We Do in the Shadows” and the oddball outlaw comedy “Hunt for the Wilderpeople.”