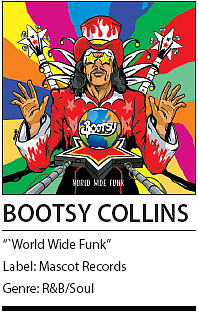 The word “funk’’ is said or sung over 200 times on the new Bootsy Collins album. What were you expecting? Banjo duets, Viking metal or Gregorian chants? Didn’t think so.

“World Wide Funk’’ is a self-contained party record. Think of something witty - or better still, funky - to say between tracks and you won’t have to play anything else for over 70 minutes. Collins can keep the dance floor full with his genial sequencing of freaky rhythms and slow jams.

If the crowd doesn’t feel like shaking their groove thing, don’t fret - there are enough guests on the album to pack the parquet by themselves.

From a Vincent Price-like introduction by Iggy Pop to Musiq Soulchild, Doug E. Fresh, Chuck D and Big Daddy Kane, more bass players on a track than you can shake a Chapman Stick at, and guitarists like Eric Gales and Buckethead, they are all part of a seamless whole.

Recorded at his Bootzilla Rehab studio in Cincinnati, “World Wide Funk’’ shows bass pioneer Collins’ masterful ability to mix and match musical styles and generations all in the name of funky grooves.