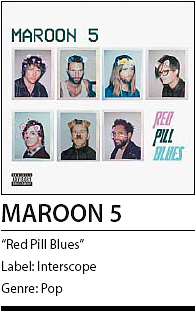 “Red Pill Blues’’ finds Maroon 5 doing what they do best, writing well-crafted, cleverly produced pop songs that instantly nudge you to the dance floor. Don’t even try to fight it.

Maroon 5’s strong sixth studio album is co-produced by Levine, who has a hand in writing every song, and producer J Kash, who helped the band with the previous hits “Sugar’’ and “Cold.’’ Aided by some inspired guests, the 10-track album sparkles without messing around too much with the band’s slick, hook-driven sound.

There are potential hits all over the album, from the opening radio-ready “Best 4 You,’’ to the flirty, dance floor-friendly “What Lovers Do,’’ showcasing a super SZA. “Lips on You,’’ co-written by Charlie Puth, is a perfect slice of melancholy electronica, while the strummy “Girls Like You’’ sounds nicely Ed Sheeran-ish.

Maroon 5 is firing on all cylinders with “Red Pill Blues,’’ an album that sounds ultra-current and yet shows off enough versatility to seduce virtually anyone.