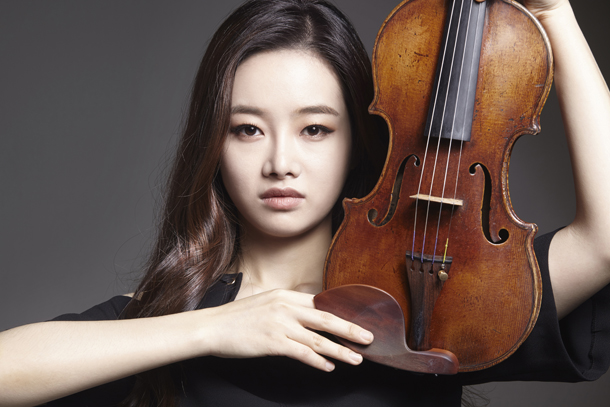 Korean violinist Kim Bomsori, who won the ARD International Music Competition last year, recently released her debut album through Warner Classics. Despite being her first album, she was able to record it with the renowned Warsaw Philharmonic Orchestra under the baton of Jacek Kaspszyk. Her schedule for the next three years is full, including a European tour with star Polish pianist Rafal Blechacz, who won the top prize at the 15th International Frederick Chopin Piano Competition in Warsaw.

Achieving such recognition is rare for a young violinist like Kim, who made a name for herself only recently. The 27-year-old violinist says all those opportunities came to her thanks to participating in as many international competitions as she could.

Over the past six years, Kim participated in 13 international competitions and won 11 prizes, including two first prizes.

Classical musicians often talk about how stressful competitions are, but they have no choice but to participate - taking home an award is “the only way” they can get acknowledged in Korea.

Kim agreed, and confessed how difficult it has been for her to participate in at least two competitions a year for six years.

“It would’ve been great to bring home first prizes for all of those,” said Kim during a press conference held last week at the Munho Art Hall in central Seoul. “But for me, that didn’t really matter. It was important for me to participate, accumulate experience and create networks with other musicians and judges, while exposing my name to the public - as the competitions today are live-streamed globally.”

Thanks to her efforts, she says her calendar for the next three years is full.

Although many critics and some judges expected Kim to win the first prize at the 15th International Henryk Wieniawski Violin Competition, she came in second. However, because of her appearance at the competition, she received a call from Blechacz, who wanted to perform with her and go on a tour next year.

“I had no connection with the pianist, but he saw the live stream of the competition in Poland and sent me an email,” said Kim. “At first, I thought it was spam - but when I realized that it was really Blechacz, I jumped for joy.”