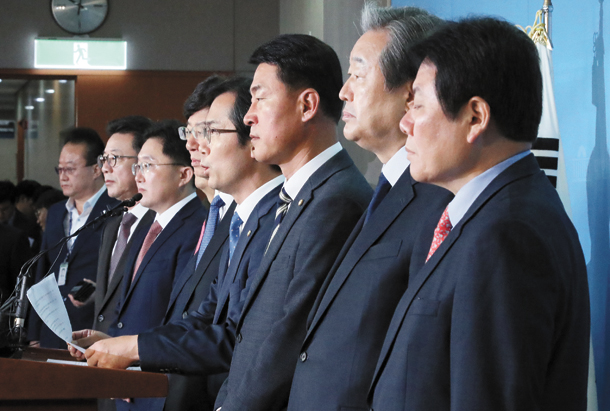 Nine lawmakers of the Bareun Party announce in the National Assembly on Monday that they will leave the minority conservative party to rejoin the main opposition Liberty Korea Party, triggering a political realignment ahead of next year’s local elections. [YONHAP]

Nine lawmakers of the Bareun Party declared on Monday their decision to leave the minority conservative party to rejoin the main opposition Liberty Korea Party (LKP), triggering a political realignment ahead of next year’s local elections.

The group of defectors issued the joint statement at a press conference in the morning at the National Assembly. In addition to Rep. Joo Ho-young, the party’s acting chairman and floor leader, Reps. Kim Moo-sung, Kang Ghil-boo, Kim Young-woo, Kim Yong-tae, Lee Jong-koo, Hwang Young-cheul, Cheong Yang-seog and Hong Chul-ho are to leave the party.

“We are leaving the Bareun Party today to start a journey for a grand conservative unity,” Rep. Kim Young-woo said at the press conference. Except Joo, eight lawmakers attended the event. They will complete paperwork to formalize their departures on Wednesday and join the LKP on Thursday. Joo will join next week after the Bareun Party elects a new leader.

“Having lost its balance, the conservatives are flustering and helplessly watching the Moon Jae-in administration’s violent and reckless operation of the country,” Kim said. “We cannot allow this unfortunate reality to continue any longer. For the sake of our country’s future, the conservatives must mend the rupture and unite.”

The Bareun Party was launched on Jan. 24 by former Saenuri Party representatives who were disgruntled with pro-Park lawmakers’ unwavering loyalty to the former president in the days leading up to her impeachment on Dec. 9, 2016. The Saenuri Party later changed its name to LKP in an attempt to distance itself from the embarrassing political scandal.

It started with 33 lawmakers and elected Rep. Yoo Seong-min, a famous adversary of Park, as the new leader in March, and later as its candidate for the May presidential election. But it lost 13 lawmakers on the eve of the race, as they abandoned the party and its underdog candidate and declared their support for the LKP and its contender, Hong Joon-pyo. Yoo and Hong completed the presidential race, only to suffer crushing defeats to the liberal frontrunner, Moon Jae-in.

When the mass defection of the nine lawmakers is completed, the LKP will have 116 lawmakers, the second largest in the legislature. The ruling Democratic Party has 121 lawmakers and the People’s Party has 40.

The Bareun Party elected Lee Hye-hoon as chairwoman in June, but she stepped down in September over a bribery scandal. The party scheduled a new leadership election for Nov. 13, while Hong repeatedly invited Bareun lawmakers to rejoin the LKP. Last week, Hong expelled Park and severed the LKP’s 20-year-long tie to the disgraced leader, clearing the final obstacle for Bareun lawmakers’ return.

The Bareun Party had a general assembly of lawmakers on Sunday, but the split was apparent. Those led by Rep. Kim Moo-sung wanted to go back to the LKP for a conservative merger, while others led by Rep. Yoo wanted to keep their own party.

Earlier in the morning, three candidates for the next week’s leadership convention including Reps. Jeong Woon-chun and Park In-sook said they will not run in the race. Speculations grew that the two lawmakers will also join the LKP. Several other lawmakers including Choung Byoung-gug, Kim Se-yeon, Oh Shin-hwan and Yu Eui-dong are also expected to eventually join the LKP.

Only three contenders, Reps. Yoo and Ha Tae-keung and former lawmaker Chung Moon-hun, will run in the leadership convention next week.

“No matter how many lawmakers choose to stay with us, my determination remains unchanged,” Rep. Yoo said. “I will try to unite the remaining 11 lawmakers and local chapter heads as well as other party staffers. I am trying to persuade as many people as possible to stay.”

He also said the party will go ahead and hold the leadership election as scheduled with the remaining three candidates.

“I feel pity for them, although their decision makes no sense to me,” Yoo said. “When we left the Saenuri Party last year, they were the first ones to leave, while I tried to stay there as long as possible and change it from inside. It is extremely piteous that they fail to respect our promise to build a new reformist road for the conservatives.”

As the Bareun Party’s experiment to become a new conservative force came to an end with a mass defection of key members, the National Assembly will be split between the conservative LKP and the liberal Democratic Party, while the People’s Party will play a role as casting vote.

The ruling Democratic Party Chairwoman Choo Mi-ae sneered at the Bareun Party’s split. “It is a move for selfish political survival without justification, public backing or integrity,” she said. Choo also said the LKP, even though it kicked out former President Park, is still a hotbed of corruption. “The expulsion alone cannot be redemption for the LKP,” she said.

“Some Bareun lawmakers who supported the impeachment of Park are now kneeling before the LKP and rejoining it,” she said. “The Democratic Party will not be shaken by this artificial political restructuring. We will focus on legislative activities and budget passage for the sake of the country.”

The Democratic Party is still expected to seek a legislative alliance with the People’s Party against a reinforced LKP, as it does not have the majority in the legislature. Many People’s Party members were former Democrats, and observers said a liberal merger between the two parties, triggered by the conservative merger, is also possible before the June local elections.

The People’s Party is split about the Bareun Party’s move, given that its chairman, Ahn Cheol-soo, had previously pushed for a merger with the conservative minority party.

Just last month, leaders of the two parties explored a possible merger, as they were sanguine about poll outcomes on a new political consortium. The plan, however, met resistance by veteran members of the People’s Party including its former chairman, Rep. Park Jie-won. The mass defection of the Bareun lawmakers on Monday effectively killed the option.

“I am not a fortune teller, but I have said for a long time that the Bareun Party will split in November,” Rep. Park said in a post on his Facebook page.

He said the conservatives will merge with the LKP at the center. “President Moon will suffer the most because he won’t be able to push forward reform using laws and systems by not forming a coalition and ending up failing to overcome the legislative huddles,” Park said, stressing the power of the party as the casting vote.

Ahn said it was unfortunate to see the split, but that he will continue to operate a policy alliance with the conservative minority.