Trump to visit Camp Humphreys, have summit with Moon

Trump to visit Camp Humphreys, have summit with Moon 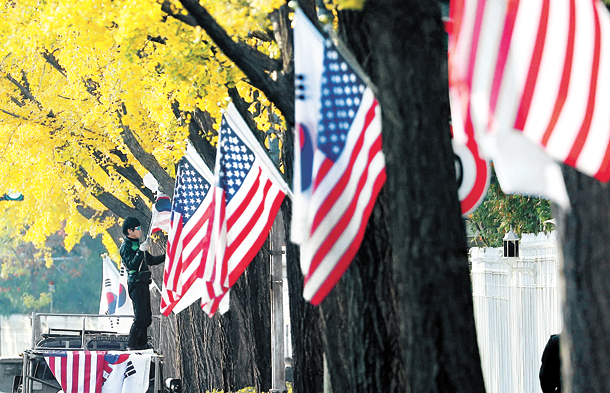 U.S. President Donald Trump is slated to begin his two-day state visit to Korea with his arrival at the U.S. Osan Air Base today.

According to the Blue House, Trump will be received with a 21-gun salute. Foreign Minister Kang Kyung-wha and Korean Ambassador to the United States Cho Yoon-je will greet him upon arrival.

Trump is the first American president to make a state visit to Korea in 25 years. President George H.W. Bush was the last one to make the state visit during the Roh Tae-woo administration in 1992.

“A foreign leader’s visit is differentiated by a state visit, an official visit, a working visit and a private visit,” said a presidential official. “Because a state visit is a visit by a head of state at the invitation of the host country’s head of state, the highest-level of reception will be offered.”

As such, a state visit involves more pomp and protocol. Since the last state visit by Bush, presidents have elected to visit on official or working visits. Bill Clinton visited twice during his presidency, George W. Bush visited three times and Barack Obama visited four times.

Trump’s two-day visit will include a summit with President Moon Jae-in, a state dinner and a speech at the National Assembly.

The first event on Trump’s itinerary is a visit to Camp Humphreys in Pyeongtaek, Gyeonggi, one of the largest U.S. military bases overseas. Korea paid for 92 percent of the $10 billion project. Trump will issue a message for Korean and U.S. troops and receive a joint military briefing.

The Moon administration reportedly recommended that Trump visit Camp Humphreys instead of the demilitarized zone.

“Camp Humphreys is the symbol of the Korea-U.S. alliance,” a presidential official said. “It also has some structural characteristics that will help us in the upcoming negotiation with Washington over the defense cost sharing.”

Moon will host an official welcome ceremony at the Blue House at 2:30 p.m. today. “An honor guard and a military band, comprised of 300 soldiers, will make a performance that portrays both traditional and modern elements,” presidential spokesman Park Soo-hyun said Monday. “The two countries’ national anthems will be played and an honor guard inspection will also take place.”

Following the welcome ceremony, the two leaders will have an exclusive summit with only limited accompanying aides. An expanded summit will follow with more ministers and aides, and a joint press conference will take place to announce the outcome of the summit.

Moon will promenade the Blue House garden with Trump before the press conference, and the first ladies of the two countries, Kim Jung-sook and Melania Trump, will have their separate teatime.

The Blue House originally planned a surprise event for the first anniversary of Trump’s election, which falls on Wednesday, but the plan is currently up in the air because of the mass shooting in Texas on Sunday. Moon sent a message to Trump and the U.S. government on Monday to offer his condolences.

“On behalf of the Korean government and the people,” the message said, “I express my deepest condolences for the heartbreaking tragedy which took many lives, including innocent children and young.”