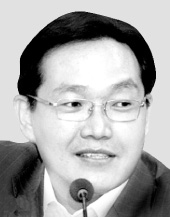 A 48-year-old prosecutor from the Seoul High Prosecutors’ Office, who was accused of obstructing a probe into the National Intelligence Service’s alleged interference in the 2012 presidential election, leapt to his death Monday, an hour before he was supposed to attend court for a detention warrant request against him.

Byun Chang-hoon jumped off a four-story law firm building in Seocho District, southern Seoul, at 2 p.m., apparently while seeking legal advice ahead of the hearing, police said. He was immediately transported to Seoul St. Mary’s Hospital but died at 4 p.m.

No suicide note was left behind.

Byun was among seven people whose homes and offices were raided by a so-called special investigation team of the Seoul Central District Prosecutors’ Office on Oct. 27 on suspicions that they obstructed an earlier special investigation in 2013, which was tasked with verifying whether the country’s spy agency illegally waged a cyber smear campaign against then-liberal candidate Moon Jae-in, who lost by a narrow margin to conservative Park Geun-hye.

Among the seven members was Jang Ho-jung, 50, former head of the Busan District Prosecutors’ Office, who in 2013 was dispatched to the NIS to head its inspection bureau. Byun was working as a legal adviser for the intelligence service.

A prosecutor who was close to Byun said he had suffered psychologically during the investigation. Another prosecutor who was dispatched to the NIS around the same time as Byun remembered him as an “elite prosecutor who was revered for his astounding performance at work,” adding, “It must’ve been tough for him to embrace the situation he was now in.”

In a statement, the Seoul Central District Prosecutors’ Office said it offers its “deep condolences” to Byun and thought “regretfully” of his death, adding that he had earned the trust of his colleagues for his “warm heart” and “thorough handling of work.”

According to prosecutors now investigating their agency in 2013, Nam Jae-joon, then the chief of the NIS who was tapped by former President Park, formed an internal task force in response to the prosecution’s announcement that it would launch a probe into the election-meddling scandal.

The NIS task force was said to include three incumbent prosecutors, including Byun. The others were mostly senior NIS officials. The task force allegedly obstructed the prosecution’s raid by sending investigators to a decoy office, saying it belonged to the psychological warfare unit, which led the cyber smear campaign.

The task force also allegedly forced agents in the psychological warfare unit to perjure themselves.