The art of the sketch takes center stage: Words become pictures in these compelling shows straddling the border between drawing and calligraphy

The art of the sketch takes center stage: Words become pictures in these compelling shows straddling the border between drawing and calligraphy 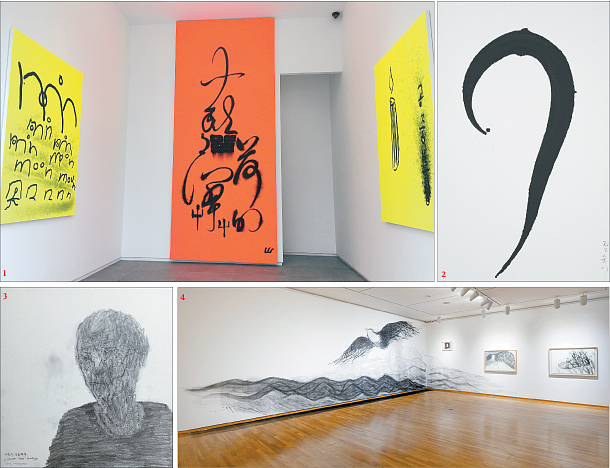 1. Yoo Seung-ho’s new work is on view at P21 as part of his solo exhibition “From Head to Toe.” The gallery opened on Gyeongnidan-gil in central Seoul in September. 2. Yoo’s piece “Jeomsoon-i” is also on display at the gallery. 3. For her frottage series, Leehaeminsun drew human faces based on rubbings from the surfaces of tree trunks. 4. For “B-Cut Drawing,” Huh Yun-hee drew directly on the walls of the Kumho Museum of Art in central Seoul. [P21, KUMHO MUSEUM OF ART, MOON SO-YOUNG]

They say the pen is mightier than the sword, but one could also say it’s more powerful than the paintbrush.

Several exhibitions dealing with drawings as finished works of art or featuring pieces that straddle the border between drawing and calligraphy are currently ongoing in Seoul.

One is artist Yoo Seung-ho’s solo exhibition “From Head to Toe,” on view simultaneously at the Park Ryu Sook Gallery in southern Seoul and its new affiliate P21 on Gyeongnidan-gil, a street near Itaewon in central Seoul famous for its hip restaurants and bars.

At the Park Ryu Sook Gallery, Yoo is showing his so-called munjasansu, calligraphic landscape paintings for which he earned his fame.

From a distance, they look like reproductions of traditional East Asian landscape paintings, but a closer look reveals tiny words written in hangul, the Korean alphabet.

At P21, Yoo is unveiling some of his newer work reflecting his evolving interest in the relationship between the written word and drawn image.

The pieces differ from his past work in style. They resemble deconstructed Chinese characters playfully dashed on the canvas by a few powerful strokes of the brush, as if they were written by a Zen monk or a drunken calligrapher. Fluorescent backgrounds add to the playful mood.

Another exhibition at the Kumho Museum of Art, located on the eastern side of Gyeongbok Palace in central Seoul, emphasizes the rawness of drawn art. “B-Cut Drawing” includes pieces from 10 artists that capture the essence of their subjects through the unrefined quality of the sketch.