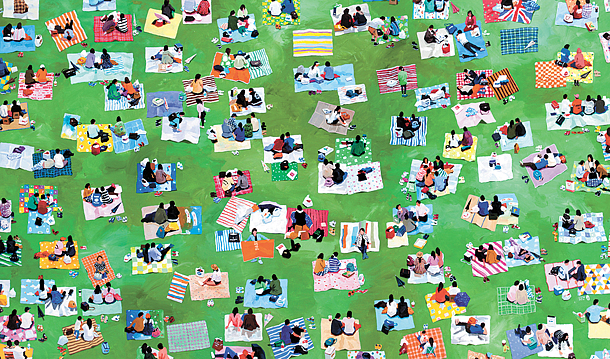 LEE SANGWON: THE COLORS OF THE CROWD

To Nov. 19: The solo show features about 70 pieces of art, mainly paintings, by Korean artist Lee Sangwon. As the title suggests, the paintings depict the crowd at amusement parks, beaches, pop concerts and even candlelight vigils like varicolored patterns. Each painting has more than one perspective in it.

“I work based on my photographs of the crowd,” the 39-year-old artist said at the opening of the exhibition last month. “I’ve been interested in the crowd and their patternized flow. It is our collective portrait patternized in the modern world.”

APPARITION OF A DISTANCE, HOWEVER NEAR

To Sunday: The solo exhibition of German artist Tim Eitel features 11 new paintings by the prominent member of the so-called “New Leipzig School,” a post-reunification German art movement that combines the figurative tradition of East Germany with abstract elements from the West.

The paintings look lonely and mysterious, with a few human figures - often just one - whose faces are turned from the viewer or blurred, in wide, flat color fields with straight-line edges. Eitel, 46, said in a press preview that his works are open to viewers’ interpretations, but added they are partly an experiment on how abstraction and figuration coexist in a painting.

Referring to paintings on exhibit like “Architectural Studies” and “Railing,” Eitel said, “If you take out human figures [from the paintings], they become abstract paintings. If you put a figure in again, the color planes in the paintings become a space.”

Made of numerous small metal pieces gleaming in gold, the sculptures look magnificent but they are made mainly of used aluminum bottle caps crumpled and folded into square slices and bound together with copper wire.

The artist, who was awarded the Golden Lion for Lifetime Achievement at the 2015 Venice Biennale, has a studio in Nigeria and has collaborated with local residents on his sculptures. 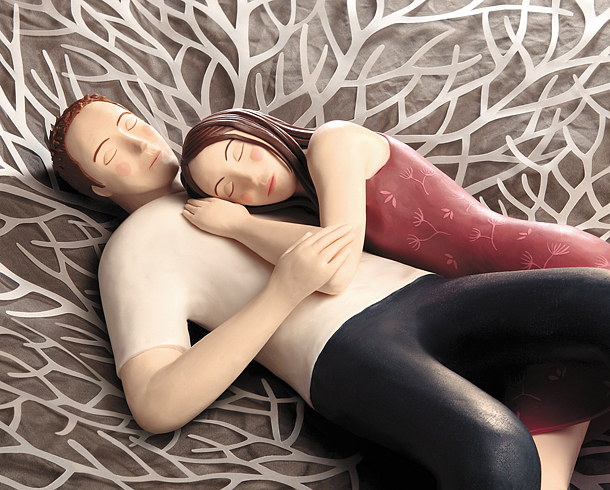 To March 4, 2018: The exhibition, inspired by the popular Italian opera “L’elisir d’amore,” features the joy and pains of love, evolution of relations between lovers and their psychology with 10 local and foreign artists’ works.

Among the participants is Spanish artist Irma Gruenholz, who makes small sculptures that depict a dramatic scene and then takes pictures of them. She calls it three-dimensional illustration. The exhibits also include the “De-Selfing” series by New-York-based Taiwanese photographer Hsin Wang, who takes pictures of herself and her boyfriend in surrealistic and symbolic ways to tell the painful sides of love. 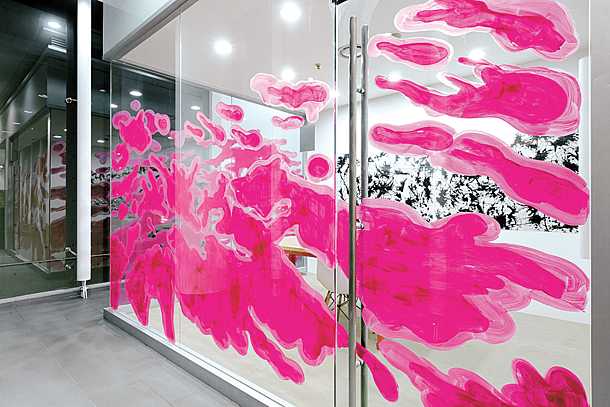 To May 26, 2018: The SongEun Art and Cultural Foundation, which was set up by Samtan, will open a new museum in 2020 at the energy company’s new headquarters to be designed by Swiss architect team Herzog & de Meuron and built in the very heart of the Gangnam. The site is a 10-minute walk from the foundation’s existing gallery, SongEun Art Space.

The second and third floors of a building that stands on the site, which will eventually become the company’s new headquarters, host a free exhibition. The show features work by the finalists and winners of the SongEun Art Award including Suki Seokyeong Kang, Donghyun Son and Choi Sun.

The exhibition is open from 2 p.m. to 7 p.m. on Thursday to Saturday. Visits on Monday to Wednesday during the same hours are also allowed but require booking at least one day before. It is closed on Sunday. www.songeunartspace.org