Apple defeats Samsung in one long suit over patents

Apple defeats Samsung in one long suit over patents 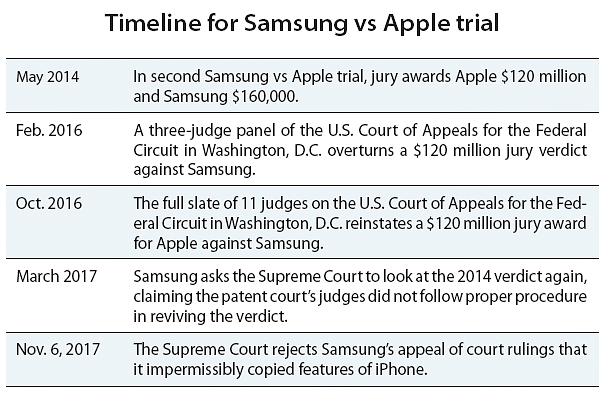 One of the two long-running patent disputes between Samsung Electronics and Apple ended Monday after the U.S. Supreme Court refused to hear Samsung’s appeal of a case that was first decided in 2014.

A jury awarded Apple $120 million and Samsung $160,000 in May 2014 but the case has been bouncing through the appeals system for the past three years. The awards were overturned in February 2016 but 11 judges on the Federal Circuit in Washington, D.C. reinstated them in October 2016.

The decision followed the Trump administration’s advice not to proceed with the case, although the Supreme Court is independent.

The case centered around Apple’s familiar slide-to-unlock patent as well as autocorrect and quick links, which turn information such as phone numbers into links.

“Our argument was supported by many who believed that the court should hear the case to reinstate fair standards that promote innovation and prevent abuse of the patent system,” Samsung said in a statement Monday. “One of Apple’s patents at issue in this case has been invalidated by courts around the world, and yet today’s decision allows Apple to unjustly profit from this patent, stunts innovation and places competition in the courtroom rather than the marketplace.”

Apple did not release a statement about the decision.

The two biggest smartphone producers still have a much bigger suit pending, which originally granted Apple more than $1 billion in damages from Samsung. That case has dragged into its seventh year.

Apple initially sued Samsung in April 2011, claiming infringement of patents, trademarks, user interface and style, and Samsung immediately countersued, claiming infringement of mobile-communications patents. The first trial began in July 2012 and a jury awarded Apple $1.05 billion in damages from Samsung in August 2012. That amount was reduced on appeal to $930 million and Samsung in December 2015 agreed to pay Apple $548 million for technology patents as part of a deal to settle the dispute. That amount excluded another $382 million in damages for allegations that Samsung copied Apple’s packaging materials.

A week later, Apple asked a U.S. court to force Samsung to cough up $180 million more.

A third trial is scheduled to kick off on May 14 to debate how the damages should be calculated. It is set to last for five days.

Judge Lucy Koh, who’s been presiding over the case since April 2011, already expressed weariness with it.

“I would prefer to not keep doing this until I retire,” she said at a hearing on Oct. 25. “I would like this to be some closure for all of us.”