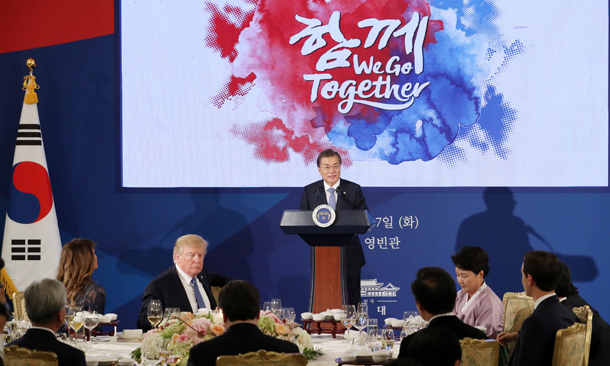 Korean business leaders who have made hefty investments in the U.S. market were invited to join the banquet at the Blue House on Tuesday to welcome U.S. President Donald Trump and the first lady, Melania Trump.

A total of 122 noted figures from the government, politics, business, academia and culture - 70 from Korea and 55 from the United States - joined the dinner, which was split into 13 tables. The heads of the National Assembly and Supreme Court, as well as the prime minister attended. Gangwon Gov. Choi Moon-soon also attended to promote the 2018 PyeongChang Olympics, to be held in Gangwon. Hong Seok-hyun, chairman of the Korean Peninsula Forum, and former Ambassador to Washington Lee Tae-sik were also there in recognition of their contributions to Korea-U.S. relations.

James Kim, chairman of the American Chamber of Commerce, and Park Seong-taek, chief of the Korea Federation of SMEs, also joined.

After Trump’s inauguration, a handful of Korean manufacturers with a focus on exports scrambled to add production facilities in the United States. In June, Samsung signed a deal with the South Carolina State government to build a plant for home appliances, which will generate investments worth $380 million. The tech giant has invested more than $10 billion over the past two years in the U.S. market.

Samsung’s consumer electronics rival, LG Electronics, held a ground-breaking ceremony on Aug. 24 to build a home appliance factory in Tennessee, which is scheduled to produce washing machines for U.S. consumers starting from the first quarter of 2019. It will have an annual production capacity of 1 million units and will create over 600 jobs.

Hyundai Motor Group, the country’s largest carmaker, runs a plant in Montgomery, Alabama, while Kia Motors, its affiliate, has a plant in West Point, Georgia. In January, the automaker announced a plan to invest $3.1 billion in the U.S. market over the next five years, and is said to be considering building a third assembly line there.

Hanjin, best known for Korean Air, built Wilshire Grand Center, the 73-story building in downtown Los Angeles, which opened in June. At 1,100 feet, the multi-complex building houses 889 hotels rooms and high-class restaurants and is the tallest building in California. It took the Hanjin Group eight years to complete it, renovating a 15-story building at a cost of $1 billion. The construction was estimated to have created 11,000 construction jobs and the Los Angeles city government was able to collect $80 million in related taxes.

Notably, Ryu Jin, chairman of Poongsan, a mid-sized defense product manufacturer that ranks 70th in terms of revenue scale, joined the dinner thanks to his company’s robust business activities in the United States. Han Moo-Kyung, who heads the Korean Women Entrepreneurs Association and is chairwoman of another mid-sized company, the car-parts producer Hyorim Industries, was invited to represent female entrepreneurs in Korea. She was the sole female business leader at the banquet. Both joined Moon’s trip to the United States in June as part of his business delegation.