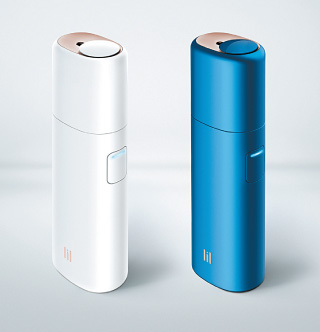 Devices like lil are known as heat-not-burn cigarettes because they heat tobacco leaves to a level at which nicotine can still be extracted without burning them like conventional cigarettes. The process produces no ash, tar or smoke. What the user ends up inhaling is nicotine-infused vapor.

The first product to hit the local market was Philip Morris’ iQOS, which sold out shortly after its official release in June this year. British American Tobacco’s glo was the second smoke-free cigarette to hit the market, and lil is now the third.

KT&G’s lil has an integrated model in which the battery and the cigarette heater are combined into one. This is similar in design to British American Tobacco’s glo, while iQOS has a detachable charging unit.

In terms of design, lil has a more cylindrical body than glo, which is closer to a rectangle with round edges, and is lighter than the competition, weighing just 90 grams. It comes in two colors: Creamy White and Sapphire Blue.

The tobacco-filled sticks that work with lil are called Fiit, priced at 4,300 won ($3.87) for 20 sticks, just like its competitors. Both flavors - Fiit Change and Fiit Change Up - use KT&G’s signature flavor-changing capsules. Once the capsule inside the filter is burst with the teeth or hands, Fiit Change changes flavor to add a minty taste whereas Fiit Change Up’s second flavor is slightly fruitier.

Compared to its peers, lil will have a price advantage during its early sale period. Those who join lil’s official homepage will be able to download a discount coupon to buy the device at 68,000 won. Its original price is 95,000 won, which is between iQOS’ 120,000 won and glo’s 90,000 won. 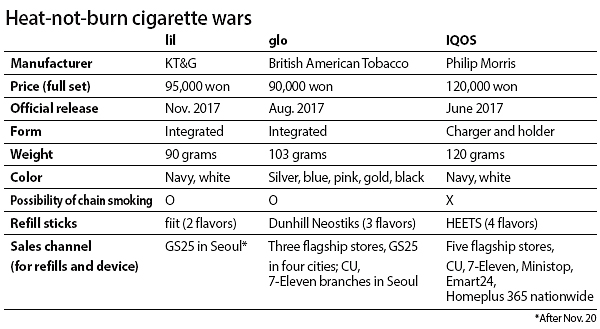 Lil will be available from nine GS25 convenience stores on Monday, the start of a trial period before official sales begin at all GS25 branches in Seoul on Nov. 20. KT&G then plans to gradually roll out sales across the country.

During the media event, the company did not give definite information or details on the health-related effects of its cigarettes, giving only vague answers to reporters’ questions on the matter.

“What we know now is that lil produces less substances conventionally emitted by ordinary cigarettes to a level similar to competing products,” said Lim Wang-seop, the managing director of KT&G’s innovative product department. He added that relevant experiments take time and promised to “open more information after we receive confirmation from a credible institute.”

Another issue in the market is an impending tax hike. The National Assembly will decide Thursday whether to raise taxes for heat-not-burn cigarettes from 50 percent to 89 percent of the level imposed on conventional cigarettes.

If this passes the vote, which is thought to be very likely, tax hikes will be applied as early as mid-December. Industry insiders said this would inevitably raise the refill prices to well over the 5,000 won level.