LG researchers get creative in the kitchen

LG researchers get creative in the kitchen

An LG Electronics employee moves a sample refrigerator used for product testing from the basement storage facility in the Changwon R&D Center in South Gyeongsang on Monday. The space can store up to 750 kitchen appliance samples. [LG ELECTRONICS]

Kitchen appliances, which include refrigerators, water purifiers, ovens and dishwashers, take up one third of LG’s home appliance and air solution business and the electronics giant hopes to bolster the business by integrating previously separate research labs and creating a smart home infrastructure. The new Changwon R&D Center, which took roughly 150 billion won ($125 million) and two and a half years to build, houses some 1,500 researchers dedicated to developing premium kitchen appliances.

When a group of reporters visited the new center that opened on Oct. 26, researchers were busy moving sample refrigerators from underground storage to research labs on the upper floors for product testing.

“Most companies use basements as parking lots but we use the space to keep a range of appliance samples,” said Kwon Oh-min, a specialist in research and engineering planning at LG Electronics. “Samples of LG’s latest kitchen appliances or appliances in development are all stored here so researchers can easily refer to past work while developing new products.” 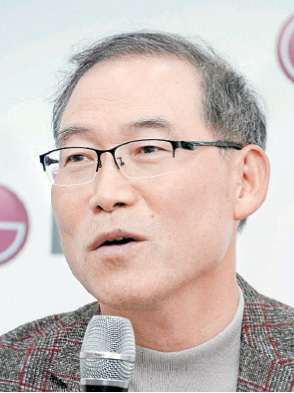 According to LG, the two basement floors have enough space to store 750 samples of kitchen appliances, 50 percent larger than the combined space of past storage facilities, though not all samples have been added yet. Before the new facility was completed, samples for refrigerators, ovens, and water purifiers were all kept in separate centers. The new integrated storage is expected to inspire researchers and help them come up with new collaborations like LG’s DIOS-branded refrigerators that have water-purifiers embedded in them.

The upper floors of the building are kitted out with top notch equipment to speed up the R&D process. On the fourth floor there are four 3-D printers, two of which are worth 800 million won. Without the printers, LG had to produce prototypes of appliance parts through a third company, raising concerns of possible technology leaks. The printers will reduce the time it takes to produce prototypes by up to 30 percent and save the company roughly 700 million won annually.

On the 14th floor, there is a “Global Cooking Lab” where ovens and cooking appliances are installed so that researchers can test new recipes. At the lab, five researchers dedicated to making new recipes cook food using LG’s ovens and compare the outcome with food cooked from industrial ovens used in bakeries and restaurants. The latest oven from LG has 130 pre-programmed cooking routines including fried chicken and cookies.

“The production facility here was built in 1976,” said Song Dae-hyun, CEO of LG’s home appliance and air solution business. “As the industry is changing rapidly - boosted by the recent wave of fourth industrial revolution technology - we thought this is the right time for us to upgrade our facilities to a so-called smart factory.”

According to Song, LG’s concept of a smart factory is an intelligent factory where all manufacturing processes, from supply to delivery, are optimized with the help of Internet of Things technology, artificial intelligence and big data. For instance, machines inside the factory would be communicating with each other so they know when to provide parts for a certain model and adjust the speed of the conveyer belt.

Though its factory is becoming smarter, Song said LG will be taking on 250 more employees every year in Changwon.

“As we upgrade our facility our production volume will keep on increasing and we need staff to handle more complex products and efficiently manage machines,” Song added. “Intelligent factories are different from merely automated factories and we will still need human staff.”