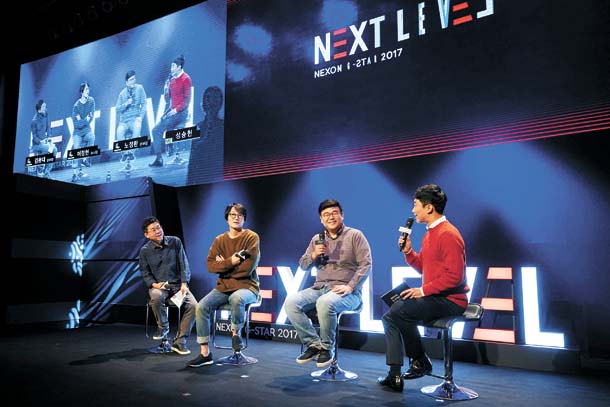 Nexon, Korea’s leading game developer, will be the main sponsor of this year’s G-Star exhibition set to take place next week in Busan.

“We’ve attended G-Star for more than 10 years, and each year, we mulled over the possibility of being the main sponsor, only to find no plausible reason to do so,” Lee Jung-heon, vice president of Nexon, said during a press event at the gaming company’s e-sports arena in southern Seoul on Tuesday.

“But 2017 was a tough year for many Korean developers and publishers, especially those whose attempts to release new titles in China were in vain due to the Thaad issue,” referring to the missile defense system that has hurt economic relations between Korea and China.

“As a first-time main sponsor, the pressure and expectations were high,” Lee said, “but we decided to host the event to give some hope and encouragement to other participants amid tough business conditions.”

G-Star is an annual exhibition organized by the Korea Association of Game Industry and gathers game developers from around the world to present their latest titles. The first four events from 2005 to 2008 took place at Kintex in Ilsan, Gyeonggi, before moving to Bexco in Busan.

Industry leaders like Netmarble and newcomers like Bluehole Studios, the developer of PlayerUnknown’s Battlegrounds, have registered for this year’s event, set to run from Nov. 16 to 19 at Bexco. According to the organizers, a number of Chinese developers will also be participating.

China has not issued any publishing licenses for games developed by Korean companies since March after the Korean government allowed the United States to install a missile defense system that China believes threatens its security interests. The decision led Chinese consumers to boycott Korean businesses, and the Chinese government intensified its scrutiny of Korean imports.

China is the biggest market in the world for games, according to industry observers. The research firm Newzoo estimates that total revenue from games generated in China for 2017 will amount to $27.5 billion, one quarter of all estimated revenue from the global market this year.

Korean developers are hoping business conditions will improve in China after the governments agreed to get relations back on track.

Other than being the main sponsor of G-Star, Nexon is poised to showcase nine new titles — five computer-based online games and four mobile games — at this year’s exhibition.

The main arrow in the quiver will be FIFA Online 4, a computer-based online football game developed by Spearhead, the Korean studio of U.S. game maker Electronic Arts, and exclusively distributed in the Korean market by Nexon.

The FIFA game will be released before the World Cup begins in Russia next summer.

Other notable games making their debut at the exhibition include Battlerite and Overhit.

Battlerite is a “team-arena-brawler” developed by Stunlock Studios in Sweden. In the game, two or three players form a team and play against another team. It has been available for early access through Steam, an online distribution platform for games, and is set to make its official debut today.

In Korea, it will be exclusively published by Nexon early next year.

Overhit, a mobile role-playing game and follow-up to Heroes of Incredible Tales, also known as HIT, will also be on display at the event. Developed by NAT Games, Overhit will officially launch on Nov. 28.

“Our objective is to have visitors try all the games available without having to wait in a long queue,” Lee said, adding that the company will set up enough devices to allow as many as 14,000 visitors to test out Nexon’s upcoming games in a single day.