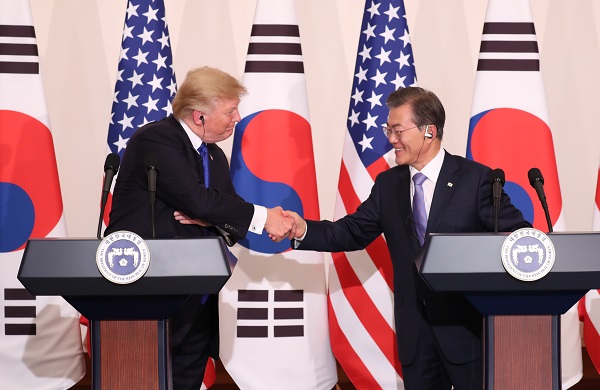 Moon and Trump held a summit at the Blue House in the afternoon and addressed the press at a joint media conference.
“We agreed to resolve the North Korean nuclear issue peacefully and establish a permanent peace on the Korean Peninsula,” Moon said. “We also reaffirmed the principle to jointly and sternly respond to the escalating North Korean nuclear and missile threats with overwhelming supremacy of power.”

Moon said he and Trump agreed to expand and reinforce the rotational deployment of the U.S. strategic assets to the peninsula and nearby regions and finalized an earlier decision to completely lift a limit on Korean missiles’ payloads.

“We agreed to push forward our cooperation at an unprecedented level to bolster Korea’s self-defense capabilities,” Moon also said.
Trump said he wants a peaceful resolution to the North Korean nuclear crisis, adding that the latest show of force involving three aircraft carriers and a nuclear submarine has made “a lot of progress” because the North seemed to understand that its forces can’t match the U.S. military.

“We hope to God we don’t have to use” the military capabilities, Trump said, urging the North to “come to the table and make a deal that’s good for the people of North Korea and the people of the world.”

Trump also addressed the issue of arms sales to Korea. He said he and Moon agreed that Korea “will be buying a tremendous” amount of advanced military hardware from the United States.

“South Korea will be ordering billions of dollars of that equipment,” Trump said, stressing that the purchases make sense for Seoul’s plan to boost its military capabilities.

The Moon administration is also pushing for an early takeover of wartime operational control of Korean troops from the United States, a plan that requires significant arms investments.

Trump said the arms deals are also beneficial for his country. “And for us it means jobs,” he said, adding that the deals will also reduce the U.S. trade deficit with South Korea. “They will be ordering billions of dollars worth of equipment and we’ve already approved some of those orders,” he said.

According to Yoon Young-chan, Moon’s senior secretary for public affairs, the two leaders ordered their officials to immediately begin discussions on Korea’s acquisition and development of advanced military assets, including reconnaissance assets.

“We will follow through with arms deals already made by the previous administration,” a senior presidential official said. “The Moon administration will also have additional talks with the United States on advanced strategic assets.”

“They include nuclear-powered submarines that we have discussed for some time and advanced reconnaissance assets,” he said. “We will have a close consultation on these two new projects.”

He said Seoul and Washington have been talking about the two projects for some time before the summit, and they need more time to reach final conclusions. “We can buy them or we can develop them together,” he said. “Although principles were agreed to [during the two leader’s first summit in Washington in June], we need to spend time to process the details.”

At the press conference, Trump also dismissed South Korea’s fear that it will be neglected in the process of resolving the North Korean crisis. “South Korea, the ROK, Korea, is very important to me,” Trump said. “There will be no skipping South Korea, I can tell you right now.”

It was evident that Trump was pushing for arms deals as a key part of his trip. “We have a terrific meeting scheduled on trade in a little while with President Moon and his representatives,” Trump said during a visit to a U.S. military installation shortly after his arrival in Korea.
“And hopefully that will start working out and working out so that we create a lot of jobs in the United States which is one of the reasons that I‘m here.”

Trump’s first destination upon his arrival was Camp Humphreys in Pyeongtaek, 70 kilometers (43 miles) south of Seoul and 100 kilometers from the border with North Korea, and Moon made a surprise visit to the U.S. military base to welcome him.

The Blue House withheld the information about Moon’s reception of Trump at Camp Humphreys until the last minute.
It was the first time a Korean president greeted a visiting foreign leader outside the Blue House, a presidential official said.
“Hard times will always reveal true friends,” Moon said before Trump and Korean and U.S. troops at a luncheon at the Camp Humphreys. “You [U.S. soldiers] are the true friend who shed blood together with Korea when it was in the most difficult time.”

“It is a historic day,” Moon continued, expressing his appreciation to both Korean and U.S. soldiers. “You are the strong cornerstone of the Korea-U.S. alliance and its future. Let’s build peace and prosperity on the peninsula and Northeast Asia together.”

Camp Humphreys, often referred as a symbol of Korea-U.S. alliance’s future, is one of the largest U.S. military installations overseas. It is the first time an American president visited the base. Korea paid 92 percent of the $10 billion in land and construction costs of the project.

Trump has repeatedly pressured Korea to pay more for its defense, and Moon apparently invited Trump to tour the facility to remind him of Korea’s significant contributions. The Blue House said after the summit that the two leaders agreed that the two countries will “reasonably” divide the cost of the U.S. troops.

Based on a U.S. troops realignment plan agreed between Seoul and Washington in 2003, construction began for Camp Humphreys in 2007. U.S. Forces Korea began moving into the new facility in March. The base, occupying 3,628 acres, has 513 buildings, including schools, stores, banks and playgrounds for families of the U.S. troops stationed there.

The U.S. 8th Army Command moved from Yongsan to Camp Humphreys in July, and the U.S. Forces Korea Command will also move before the end of this year.

According to sources, General Vincent Brooks, commander of U.S. Forces Korea, briefed Trump about North Korea and the readiness of the Korea-U.S. Combined Forces Command.