Trump is treated to menu symbolic of the alliance

Trump is treated to menu symbolic of the alliance 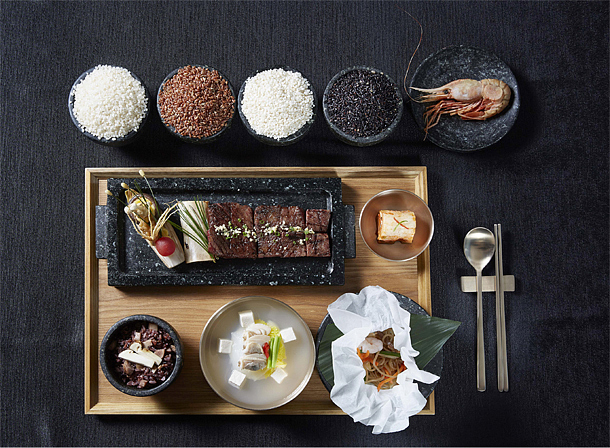 The Blue House hosted a state dinner for the U.S. presidential couple on Tuesday, offering carefully assembled dishes symbolic of the Korea-U.S. alliance.

President Moon Jae-in and U.S. President Donald Trump attended the dinner with their wives for two hours following a summit. According to the Blue House, 122 people from the two countries, including top Seoul and Washington officials and leaders of Korea’s military, business, academic, cultural and sports communities were invited to the event.

The Blue House also said an assorted plate of corn porridge, sweet potato and pumpkin, burdock and fried lotus root was served as an appetizer.

“They are inexpensive ingredients once used by Koreans during economic hardships, but times have changed, and now they are eaten for their healthy qualities,” the Blue House said. “This represents the way the Korea-U.S. alliance has become more valuable over time.” 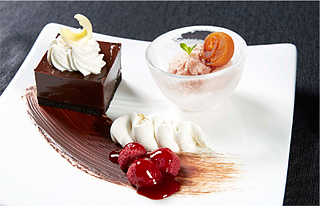 Grilled sole with brown bean consomme was served second. Sole is a fish dish favored by Trump, the Blue House said, adding that it was served for the presidential dinner he hosted for Moon at the White House in June. The Blue House said the sole was from Moon’s hometown of Geoje Island.

The main dish was grilled hanwoo (Korean beef) ribs from Gochang, North Jeolla, marinated 360-year-old soy sauce, and rice topped with shrimp from Dokdo Island, with other side dishes. The Blue House said four different types of rice from around the country were used.

Dessert was a triple-chocolate cake with raspberry and vanilla sauce, and iced Korean cinnamon punch topped with persimmon. Hans Cake, a mid-size cafe and bakery, made the cake.

The Blue House said “Chun,” which means spring in Korean, a traditional Korean alcohol made by a mid-size company, was used as the drink for the two leaders to propose a toast.

Ahead of the dinner, the first lady, Kim Jung-sook, received the U.S. first lady, Melania Trump, for teatime, while the two presidents held a summit.

Along with the tea, Kim served dried sweet persimmon she harvested over the weekend from trees of the Blue House garden. The dried persimmon was served with walnut inside and covered with chocolate, the Blue House said.