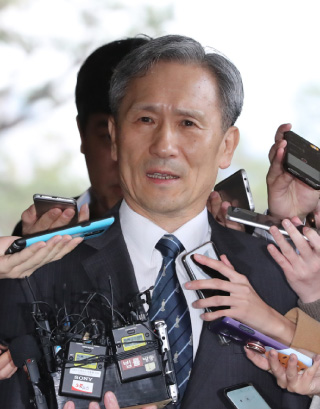 Kim is likely to face a misconduct charge for being briefed by his underlings about the military cyber command’s manipulation of online public opinion and personally interfering in their work, prosecutors from a special investigation team who are now looking into the matter said.

Lim Kwan-bin, the junior rank who filed the reports to Kim as head of the defense policy office, was questioned Monday.

When asked by reporters upon arriving at the prosecutors’ office Tuesday whether he masterminded the cyber plot, Kim neither denied nor confirmed this. He said that the cyber command was founded to fend off North Korea’s propaganda maneuvers against the South, and that the command “did their best to get their work done.”

Kim refused to answer whether he briefed then-President Lee on operations, a pivotal part of the investigation prosecutors are trying to clarify.

A task force within the Defense Ministry had announced last week that hundreds of reports detailing political views expressed by local celebrities and politicians on their social media accounts, as well as the cyber command’s swaying of public opinion regarding North Korea’s sinking of South Korea’s Cheonan warship and the shelling of Yeonpyeong Island, were discovered to have been sent to the Lee Blue House via an internal communication network used by the military.

But whether the reports actually landed on Lee’s desk was not proved.

A source involved in the prosecution’s special investigation team said the focus of the probe will likely steer towards Lee once they finish questioning the former defense minister.

Lee is suspected of being involved in the abrupt increase in hiring of agents to the cyber command’s Unit 530, which allegedly led psychological operations, in July 2012, before the presidential elections that December. On another front, a local court issued a pre-trial detention warrant Tuesday for two senior prosecutors and two former officials in the National Intelligence Service (NIS) for allegedly obstructing a probe led by the prosecution in 2013, which was tasked with digging into the NIS’s interference in the 2012 presidential election.

According to a special investigation team within the prosecution that is now investigating the case, Nam Jae-joon, then the NIS chief who was tapped by former President Park Geun-hye, formed an internal task force in response to the prosecution’s announcement that it would launch a probe into the election-meddling scandal.

The NIS task force included incumbent prosecutors, who at the time were dispatched to offer legal service to the spy agency. Among the four people whose detention warrants from prosecutors were approved Tuesday are Jang Ho-jung, 50, former head of the Busan District Prosecutors’ Office, and Lee Je-yeong, 43, who works for the Daejeon High Prosecutors’ Office. They were all charged with persuading other suspects involved in the case to commit perjury and obstruction of performance of official duty.

The Seoul Central District Court, which reviewed the warrant, explained there was enough evidence to believe the allegations were true, and that it feared the suspects might attempt to destroy the proof. Two other former intelligence officials were detained in the case, bringing the total number of suspects behind bars to six.

Byun Chang-hoon, former prosecutor from the Seoul High Prosecutors’ Office, who was among seven core members of the NIS taskforce, committed suicide on Monday an hour before going to court about his detention warrant.

Prosecutors are also investigating officials in the former Park Blue House who face allegations they secretly received funds from the NIS. The money was meant to be used for the NIS chief’s “special activities.” Nam Jae-joon, who led the spy agency at that time, is expected to be summoned for questioning today.