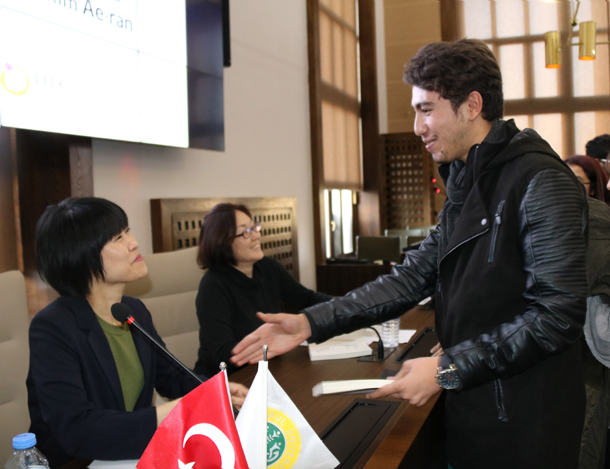 Turkish students get autographs from Korean writers during a Korean literary event at Istanbul University on Tuesday. [YONHAP]

Istanbul University and the Literature Translation Institute of Korea held the event at the university on Tuesday (local time) on the sidelines of the 36th International Istanbul Book Fair.

Two Korean novelists, Choi Yoon and Kim Ae-ran, visited the university to talk to around 70 Turkish students and faculty members from the department of Korean Language and Literature about their books and, by extension, Korean literature in general.

Last fall, the university opened the department, becoming the third school to do so in a country where only about 15 Korean books have been translated into Turkish.

Earlier this year, the Turkish version of award-winning writer Han Kang’s “The Vegetarian” became a best seller, raising a glimmer of hope for better recognition of Korean literature in Turkey.

“Except for Orhan Pamuk’s books, Turkish literature is not well represented in Korea. I think it is your job to introduce literature from each country to the other,” Choi told the attendees.

Korean Consul General Cha Young-cheol pointed out the lack of literary exchanges between the two nations despite active cooperation in the economic sector.

“Marking the 60th anniversary of establishing diplomatic relations between the two [countries], I hope many related events will provide the momentum to expand exchanges in this field,” he said.