The rise of single adulthood

The rise of single adulthood 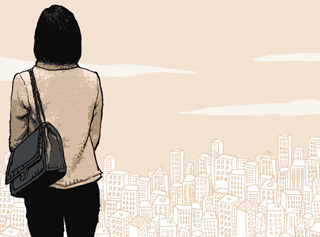 A low birthrate and fast aging have become the quintessential features of Korea’s demography. Korea’s fertility rate slipped to a record low this year, and with the share of people 65 and older exceeding 14 percent of the population, Korean society has already has passed the threshold for an aged society.

But I want to note another distinct change in Korean demographics, and that is the rapid increase in the unmarried population and single-person households. A low birthrate and aging society have been problems for the last decade, but the spike in single adults is the latest development. Single-person households have been a growing phenomenon in most developed economies, but the pace of growth in Korea has been dramatic.

Many feel the phenomenon is natural as more and more people are getting married late or not at all. But what catches my attention are singles in their 40s. A 2015 census report showed 22 percent of men and 11 percent of women aged 40 to 44 were unmarried.

In Seoul, one out every four men and one out of five women have never been married. The share could become bigger when those aged 35 to 39 reach their 40s in five years’ time. In 2005, the unmarried portion did not reach 5 percent for both the male and female population.

A bulge in the number of middle-aged people living alone could have two major social ramifications. The first is in policy approach. There has been no separate policy dealing with problems surrounding singles in their 40s and 50s as it was generally believed that adults at that age would mostly be married and living with their families.

But there should be separate welfare and health policies for them. So far, it has been the responsibility of the family to care for them if they become sick. But now, society must take care of them. The health conditions of middle-aged people will become more important as the generation of Korean baby boomers born between 1955 and 1963 head into retirement. Their health and welfare could determine the social costs that future generations will have to bear in 20 to 30 years.

The second concern is changes in the market. Before, a middle-aged couple mostly had one or two children in a typical Korean family. Groceries, finances, housing and education were all designed to meet family needs.

But the rise of single-person households will change the consumer market. The family market will be reduced to create a new market for older singles. A single person in middle age will not need a big apartment. Married adults have to care for their children and education, but singles will mostly spend on themselves to dine and entertain. They will also seek more insurance policies for self-protection.

The increase in middle-aged singles will therefore create different problems. But public policy is entirely on focused birthrates and aging. The policy to promote childbirth first aims to encourage people to get married. But that is ill-placed as more and more age groups prefer not to get married. Living alone will soon become commonplace, and public policies should be redesigned for the new norm.

*The author is a professor at the School of Public Health at Seoul National University.