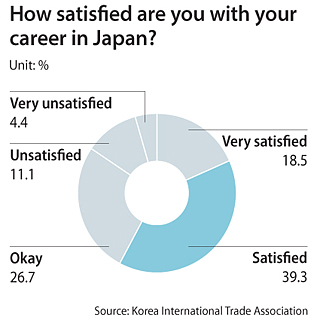 Young Koreans who have landed jobs in Japan are mostly satisfied with their working conditions and are willing to recommend the move to other job seekers, according to a report from the Korea International Trade Association released Wednesday.

According to a survey of 143 young Koreans conducted by the Tokyo office of the association between August and October, 57.8 percent of respondents said they were either satisfied or very satisfied with their working environment. Asked if they would recommend their friends find a job in Japan, 84.5 percent said they would.

Only about 15.5 percent of respondents said they were unsatisfied with their status in Japan.

Many of the young people that moved to Japan, 24.8 percent of respondents, said they did so with the aim of developing careers in global companies, while another 19.6 percent said they expected a favorable working environment. About 19 percent said they were driven to work in Japan as landing a job in Korea was difficult.

“Japanese companies tend to focus on applicants’ potential rather than specs such as academic backgrounds,” KITA said in report. “For instance, large conglomerates like Fujitsu and Dentsu often hire from its subordinated companies by taking recommendations from employees as they put more weight on job capabilities and potential.”

As for working condition, Japanese firms offer fewer working hours compared to Korean companies. According to 2015 data from the Organization for Economic Cooperation (OECD) and Development, the average annual working hours total 2,285 hours in Korea and 1,729 hours in Japan.

“While Korea is suffering from youth unemployment problems, Japan is open to taking on a foreign workforce due to a lack of working population,” a spokesperson from KITA said. “The government needs to more actively support young people so they can land jobs in Japan.”

While 77.3 percent of survey participants said they have had support from public institutions to find jobs in Japan, 54 percent said the support was helpful. Respondents said public support programs need to link job seekers with jobs of higher quality and provide more information regarding opportunities in Japan. They also said there were too many unauthorized institutions that offered support programs, often causing confusion to job seekers.

While the majority of the workers in Japan said they would recommend heading to Japan to other job seekers in Korea, they cited low wages, loneliness and difficulty in finding a partner for marriage as difficulties faced when staying in the country for the long term.