KITA head: Public servants are not the way to create jobs

KITA head: Public servants are not the way to create jobs 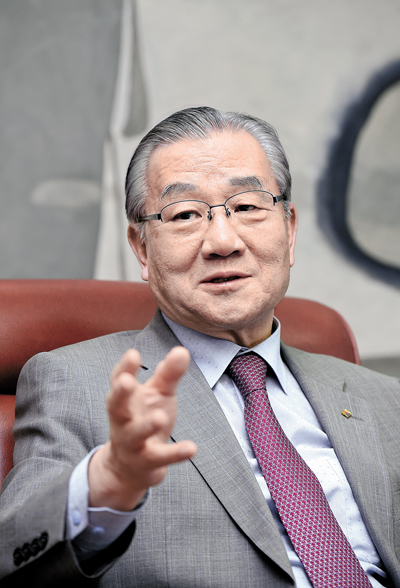 Kim In-ho, chairman and CEO of the Korea International Trade Association (KITA), is known to be outspoken and straightforward. After he announced his resignation on Oct. 24, he held a press conference and told reporters that the government has recommended that he step down. “The reason I went so far as to hold a press conference is because I have a message for this society,” said Kim.

Kim passed the civil service examination in 1966 and assumed various government roles, including a number of positions at the Economic Planning Board, the predecessor of the current Ministry of Finance and Economy, the head of the Korea Consumer Agency as well as the chairman of the Fair Trade Commission. He was also the senior presidential secretary for economic affairs during the Kim Young-sam administration, weathering the 1997 Asian financial crisis.

As an economic official, he’s assumed important posts through seven different administrations from the Roh Tae-woo administration in the 1980s to the current Moon Jae-in administration. Although he’s tried to control the economy, Kim came to the realization that there is no better economic option than a free market and competition. “The government is the biggest impediment to our economy,” Kim said. “One-third of the government’s function is limiting market competition.”

The JoongAng Ilbo, an affiliate of the Korea JoongAng Daily, sat down with the CEO of KITA on Nov. 2 to talk about his resignation as well as the Korean economy.

Q. [Regarding the resignation], were you ordered by the Blue House?

A. I never said it was ordered by the Blue House. But to my knowledge, there isn’t a case where the position of the chairman of KITA was decided without the knowledge of the president.

Who gave you this message?

It’s not important through whom I got this message. But I did make two things clear. First is that I will clarify the reason of the resignation when I leave. Secondly, I asked for confirmation that my resignation has been reported. I did the first part, but I never got the confirmation.

Pressure is only pressure when the recipient feels threatened. I never felt threatened. Let’s just say that it was a “recommendation out of good will.” KITA cannot function properly if it doesn’t work well with the government. I could have quit immediately, but I decided not to because I have a message that I would like to get across. It is to make things more transparent and fix the outdated policies and realities. KITA is a private economic institution. There is no basis for the government to get involved in personnel affairs. The past governments did this, of course, but isn’t the current government a government that says not to do such a thing?

Some say that Kim In-ho is a person from the Park Geun-hye administration. What do you think about this?

I do not belong to any specific administration. I consider myself a “public figure for life.” I said a number of things during the Park administration that it may have not liked. I once said the government should be cautious when investing in companies and fix the custom where the law enforcement link different cases to shed blood by all means. It was when investigations into Posco and Hyosung were underway. I got a call from Ahn Jong-beom, former President Park Geun-hye’s economic affairs secretary, saying the president wanted to let the CEO of KITA know how much of a problem certain companies have. It was a warning.

The economic policies of the Moon Jae-in administration are quite controversial. What do you think is the most problematic?

It is the lack of understanding about companies. The economy is centered on companies and companies are the ones that create jobs, distribute wealth and provide welfare. I am confident. [Korea should be] an entrepreneurial nation. Only such a country can achieve development. Try to name any countries without establishing a system centered on entrepreneurship. Despite being a communist country, China’s economy is a market economy. The Chinese government knows that its economy will not work otherwise.

Are you advocating for a “small government” system?

The size of the government does not matter. But if a government wants to do something, do it through the market. Keep the companies alive. It’s not about minimizing the role of the government but it’s about changing its role. The government must to do what it has to do but stay away from doing what it’s not supposed to do.

Are you saying competition is the solution then?

The economy cannot be ordered around. In the 1980’s, when I was the director of price policies, we would set the prices of some 85 products in just overnight. This was only possible because the economy could be controlled and we lacked supplies and goods. Even then, I thought to myself that this is not how it’s supposed to be. Competition rears talent and creates food. After opening up the film market, Korean films became more competitive. There are more jobs [in the industry]. But look at the policies for agriculture or small- and medium-sized companies. The government provided support and protection for centuries, but what has changed?

What do you think about the bullish export market led by the boom in semiconductors?

Crisis comes during a boom. When the figures look positive without any progress in competitiveness, this is a tremendous risk. It means it’s time to fall.

How can we find a way out?

The manufacturing sector has done enough. The service industry is now the answer, but nothing is happening there. I am talking services such as education, law, MICE [services to host meeting, incentive travels, conferences and exhibitions] and medicine. If we open up our legal market, Korean lawyers will dominate the market in Southeast Asia in just a few years. Korea’s medical service is also quite advanced. But the government is absolutely against the privatization of medicine. If so, it has to be honest that it will give up the creation of jobs. With the service industry tied up, it’s not possible to create more jobs. Does it make sense to create jobs by hiring more public servants?