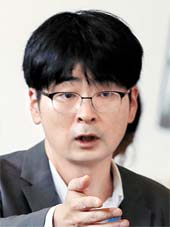 An official at the Blue House will go on trial for carrying out unlawful election campaign activity during a ceremony in the run-up to the presidential election in May, prosecutors said Wednesday.

Tak Hyun-min, a protocol officer to President Moon Jae-in, has been indicted without detention on charges of election law violations, according to the Seoul Central District Prosecutors’ Office.

The former campaigner for Moon is accused of playing music produced by Moon’s camp during an event held three days before the election to encourage people to vote.

Any campaign to encourage voting is forbidden by election law if it includes canvassing for a particular candidate. It was a ceremony hosted by a third party unrelated to Moon’s camp or any of the contenders, prosecutors said. But toward the end of the event, Tak had the host play the official campaign song of Moon’s 2012 presidential election bid, when Moon first ran for president but lost to his predecessor, Park Geun-hye, by a narrow margin. Tak has drawn media attention as he faced pressure from opposition lawmakers to step down over his past sexist remarks made when he was a university professor before joining Moon’s camp.