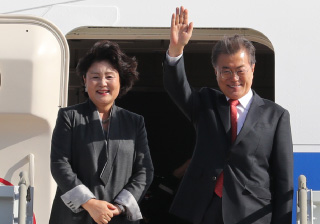 President Moon Jae-in and the first lady, Kim Jung-sook, about to board a flight for a state visit to Indonesia Wednesday. [YONHAP]

President Moon Jae-in left for Indonesia Wednesday on a state visit that will include a bilateral summit with his Indonesian counterpart and other political and business leaders there.

The trip comes as part of a three-nation Southeast Asia trip that will later take him to Vietnam and the Philippines for regional forums.

Moon is due in Jakarta later in the day for a three-day visit, marking his first-ever state visit to a foreign country since taking office in May, according to the Blue House.

Moon and his Indonesian counterpart, Joko Widodo, are scheduled to hold a summit on Thursday to discuss ways to boost the countries’ economic and trade relations, as well as their defense cooperation.

Before the summit, Moon plans to attend a joint business forum where he is expected to introduce his New South Policy, which seeks to greatly improve his country’s diplomatic and economic ties with Southeast Asian countries, according to Blue House officials.

On Friday, he will head to Da Nang, Vietnam, for the annual Asia-Pacific Economic Cooperation (APEC) summit that will involve leaders from 20 other member economies, including U.S. President Donald Trump.

Moon and Trump held their third bilateral summit in Seoul earlier this week.

Moon is scheduled to hold a bilateral summit with his Chinese counterpart, Xi Jinping, on the sidelines of the APEC meeting. It will mark their second bilateral talks.

On Sunday, Moon will reach his third and final destination, Manila.

There, he will again be joined by his U.S. counterpart and 14 other global leaders for the East Asia Summit that will be followed by another regional forum hosted by the Association of Southeast Asian Nations (Asean).

The Asean forum, known as the Asean Plus Three summit, involves all 10 member states of Asean and the leaders of South Korea, China and Japan.

Moon will return home next Wednesday.